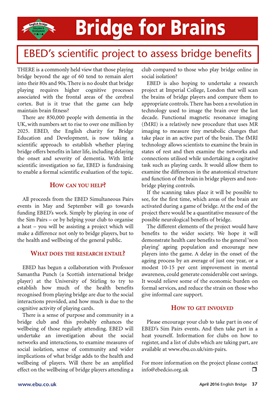 THERE is a commonly held view that those playing

bridge beyond the age of 60 tend to remain alert

into their 80s and 90s. There is no doubt that bridge

associated with the frontal areas of the cerebral

cortex. But is it true that the game can help

UK, with numbers set to rise to over one million by

2025. EBED, the English charity for Bridge

Education and Development, is now taking a

scientific approach to establish whether playing

the onset and severity of dementia. With little

to enable a formal scientific evaluation of the topic.

HOW CAN YOU HELP?

All proceeds from the EBED Simultaneous Pairs

events in May and September will go towards

funding EBED's work. Simply by playing in one of

the Sim Pairs - or by helping your club to organise

a heat - you will be assisting a project which will

make a difference not only to bridge players, but to

the health and wellbeing of the general public.

WHAT DOES THE RESEARCH ENTAIL?

EBED has begun a collaboration with Professor

player) at the University of Stirling to try to

establish how much of the health benefits

recognised from playing bridge are due to the social

interactions provided, and how much is due to the

There is a sense of purpose and community in a

bridge club and this probably enhances the

wellbeing of those regularly attending. EBED will

undertake an investigation about the social

networks and interactions, to examine measures of

implications of what bridge adds to the health and

wellbeing of players. Will there be an amplified

effect on the wellbeing of bridge players attending a

club compared to those who play bridge online in

EBED is also hoping to undertake a research

project at Imperial College, London that will scan

the brains of bridge players and compare them to

appropriate controls. There has been a revolution in

technology used to image the brain over the last

(fMRI) is a relatively new procedure that uses MR

take place in an active part of the brain. The fMRI

technology allows scientists to examine the brain in

states of rest and then examine the networks and

connections utilised while undertaking a cogitative

task such as playing cards. It would allow them to

examine the differences in the anatomical structure

and function of the brain in bridge players and nonbridge

If the scanning takes place it will be possible to

see, for the first time, which areas of the brain are

activated during a game of bridge. At the end of the

project there would be a quantitative measure of the

The different elements of the project would have

benefits to the wider society. We hope it will

players into the game. A delay in the onset of the

ageing process by an average of just one year, or a

modest 10-15 per cent improvement in mental

It would relieve some of the economic burden on

formal services, and reduce the strain on those who

HOW TO GET INVOLVED

Please encourage your club to take part in one of

EBED's Sim Pairs events. And then take part in a

heat yourself. Information for clubs on how to

register, and a list of clubs which are taking part, are