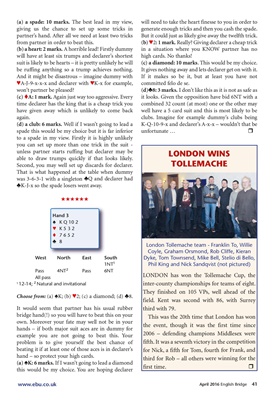 giving us the chance to set up some tricks in

partner's hand. After all we need at least two tricks

from partner in order to beat this.

(b) a heart: 2 marks. A horrible lead! Firstly dummy

will have at least six trumps and declarer's shortest

be ruffing anything so a trump achieves nothing.

time declarer has the king that is a cheap trick you

have given away which is unlikely to come back

spade this would be my choice but it is far inferior

to a spade in my view. Firstly it is highly unlikely

partner starts ruffing but declarer may be

able to draw trumps quickly if that looks likely.

Second, you may well set up discards for declarer.

That is what happened at the table when dummy

®K-J-x so the spade losers went away.

It would seem that partner has his usual rubber

bridge hand(!) so you will have to beat this on your

own. Moreover your fate may well not be in your

hands - if both major suit aces are in dummy for

example you are not going to beat this. Your

problem is to give yourself the best chance of

hand - so protect your high cards.

this would be my choice. You are hoping declarer

generate enough tricks and then you cash the spade.

But it could just as likely give away the twelfth trick.

in a situation where you KNOW partner has no

high cards. No thanks!

It gives nothing away and lets declarer get on with it.

If it makes so be it, but at least you have not

it looks. Given the opposition have bid 6NT with a

combined 32 count (at most) one or the other may

LONDON has won the Tollemache Cup, the

inter-county championships for teams of eight.

They finished on 105 VPs, well ahead of the

field. Kent was second with 86, with Surrey

This was the 20th time that London has won

the event, though it was the first time since

fifth. It was a seventh victory in the competition

for Nick, a fifth for Tom, fourth for Frank, and

third for Rob - all others were winning for the