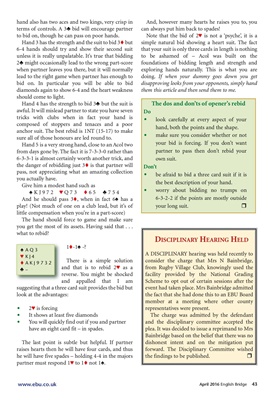 to bid on, though he can pass on poor hands.

6-4 hands should try and show their second suit

unless it is really unpalatable. It's true that bidding

when partner leaves you there, but it will normally

lead to the right game when partner has enough to

bid on. In particular you will be able to bid

diamonds again to show 6-4 and the heart weakness

should come to light.

awful. It will mislead partner to state you have seven

tricks with clubs when in fact your hand is

composed of stoppers and tenaces and a poor

sure all of those honours are led round to.

Hand 5 is a very strong hand, close to an Acol two

6-3-3-1 is almost certainly worth another trick, and

the danger of rebidding just 3t is that partner will

pass, not appreciating what an amazing collection

Give him a modest hand such as

play! (Not much of one on a club lead, but it's of

little compensation when you're in a part-score)

The hand should force to game and make sure

you get the most of its assets. Having said that . . .

There is a simple solution

and appalled that I am

suggesting that a three card suit provides the bid but

look at the advantages:

• It shows at least five diamonds

• You will quickly find out if you and partner

have an eight card fit - in spades.

The last point is subtle but helpful. If partner

raises hearts then he will have four cards, and thus

he will have five spades - holding 4-4 in the majors

And, however many hearts he raises you to, you

can always put him back to spades!

that your suit is only three cards in length is nothing

to be ashamed of - Acol was built on the

foundations of bidding length and strength and

exploring hands naturally. This is what you are

doing. If when your dummy goes down you get

them this article and then send them to me.

The dos and don'ts of opener's rebid

• look carefully at every aspect of your

hand, both the points and the shape.

• make sure you consider whether or not

your bid is forcing. If you don't want

partner to pass then don't rebid your

• be afraid to bid a three card suit if it is

the best description of your hand.

• worry about bidding no trumps on

A DISCIPLINARY hearing was held recently to

facility provided by the National Grading

Scheme to opt out of certain sessions after the

the fact that she had done this to an EBU Board

member at a meeting where other county

The charge was admitted by the defendant

and the disciplinary committee accepted the

plea. It was decided to issue a reprimand to Mrs

Bainbridge based on the belief that there was no

dishonest intent and on the mitigation put

the findings to be published. r