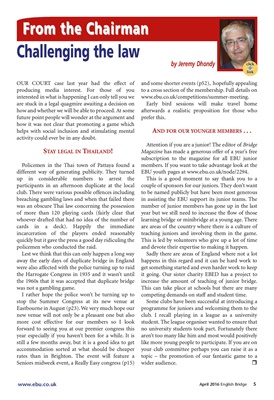 OUR COURT case last year had the effect of

producing media interest. For those of you

interested in what is happening I can only tell you we

are stuck in a legal quagmire awaiting a decision on

how and whether we will be able to proceed. At some

future point people will wonder at the argument and

how it was not clear that promoting a game which

activity could ever be in any doubt.

Policemen in the Thai town of Pattaya found a

up in considerable numbers to arrest the

participants in an afternoon duplicate at the local

club. There were various possible offences including

breaching gambling laws and when that failed there

was an obscure Thai law concerning the possession

of more than 120 playing cards (fairly clear that

whoever drafted that had no idea of the number of

cards in a deck). Happily the immediate

incarceration of the players ended reasonably

quickly but it gave the press a good day ridiculing the

policemen who conducted the raid.

Lest we think that this can only happen a long way

away the early days of duplicate bridge in England

were also affected with the police turning up to raid

the Harrogate Congress in 1935 and it wasn't until

the 1960s that it was accepted that duplicate bridge

was not a gambling game.

I rather hope the police won't be turning up to

stop the Summer Congress at its new venue at

Eastbourne in August (p23). We very much hope our

new venue will not only be a pleasant one but also

more cost effective for our members so I look

forward to seeing you at our premier congress this

year especially if you haven't been for a while. It is

still a few months away, but it is a good idea to get

accommodation sorted at what should be cheaper

rates than in Brighton. The event will feature a

to a cross section of the membership. Full details on

afterwards a realistic proposition for those who

Attention if you are a junior! The editor of Bridge

Magazine has made a generous offer of a year's free

subscription to the magazine for all EBU junior

members. If you want to take advantage look at the

This is a good moment to say thank you to a

couple of sponsors for our juniors. They don't want

to be named publicly but have been most generous

in assisting the EBU support its junior teams. The

number of junior members has gone up in the last

year but we still need to increase the flow of those

learning bridge or minibridge at a young age. There

are areas of the country where there is a culture of

teaching juniors and involving them in the game.

and devote their expertise to making it happen.

Sadly there are areas of England where not a lot

happens in this regard and it can be hard work to

get something started and even harder work to keep

it going. Our sister charity EBED has a project to

increase the amount of teaching of junior bridge.

This can take place at schools but there are many

Some clubs have been successful at introducing a

programme for juniors and welcoming them to the

club. I recall playing in a league as a university

student. The league organiser wanted to ensure that

aren't too many like him and most would positively

like more young people to participate. If you are on

your club committee perhaps you can raise it as a

topic - the promotion of our fantastic game to a

Challenging the law by Jeremy Dhondy