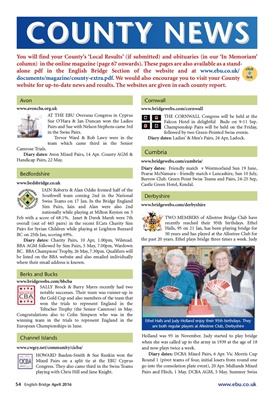 AT THE EBU Overseas Congress in Cyprus

in the Swiss Pairs.

Trevor Ward & Rob Lawy were in the

team which came third in the Senior

IAIN Roberts & Alan Oddie formed half of the

Swiss Teams on 17 Jan. In the Bridge England

nationally while playing at Milton Keynes on 3

overall (out of 445 pairs) in the recent ECats Charity Sim

Pairs for Syrian Children while playing at Leighton Buzzard

be listed on the BBA website and also emailed individually

where their email address is known.

notable successes. Their team was runner-up in

the Gold Cup and also members of the team that

won the trials to represent England in the

Teltscher Trophy (the Senior Camrose) in May.

Congratulations also to Colin Simpson who was in the

winning team in the trials to represent England in the

Mixed Pairs on a split tie at the EBU Cyprus

Congress. They also came third in the Swiss Teams

THE CORNWALL Congress will be held at the

Championship Pairs will be held on the Friday,

50 years and has played at the Allestree Club for

column) in the online magazine (page 67 onwards). These pages are also available as a standalone

Ethel Halls and Judy Holland enjoy their 95th birthdays. They

are both regular players at Allestree Club, Derbyshire

Holland was 95 in November. Judy started to play bridge

and now plays twice a week.

Round 1 (pivot teams of four, initial losers from round one

Pairs and Flitch, 1 May. DCBA AGM, 5 May. Summer Swiss