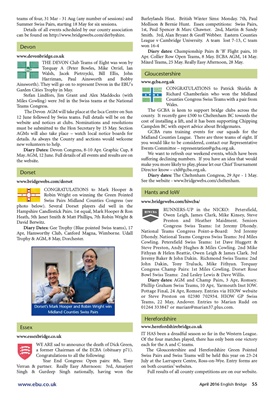 Richard Chamberlain who won the Midland

Counties Congress Swiss Teams with a pair from

The GCBA is keen to support bridge clubs across the

county. It recently gave £500 to Cheltenham BC towards the

cost of installing a lift, and it has been supporting Chipping

Campden BC with expert advice about Bridgemates.

GCBA runs training events for our squads forrepresentation@gcba.org.uks League. There are three teams of eight. If

We want to refresh our weekend events, which have been

suffering declining numbers. If you have an idea that would

RUNNERS-UP in the NICKO: Petersfield,

Teams, 22 May, Andover. Entries to Marian Rudd on

IT HAS been a dreadful season so far in the Western League.

Of the four matches played, there has only been one victory

each for the A and C teams.

The Gloucestershire and Herefordshire Green Pointed

July at the Larruperz Centre, Ross-on-Wye. Entry forms are

on both counties' websites.

Details of all events scheduled by our county association

can be found on http://www.bridgewebs.com/derbyshire.

THE DEVON Club Teams of Eight was won by

Ainsworth). They will go on to represent Devon in the EBU's

Garden Cities Trophy in May.

Miles Cowling) were 3rd in the Swiss teams at the National

12 June followed by Swiss teams. Full details will be on the

must be submitted to the Hon Secretary by 15 May. Section

details. As always the County and sections would welcome

May. AGM, 12 June. Full details of all events and results are on

photo below). Several Dorset players did well in the

WE ARE sad to announce the death of Dick Green,

a former Chairman of the ECBA (obituary p71).

Congratulations to all the following: