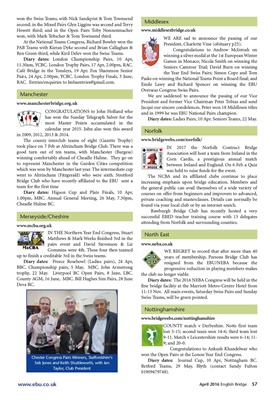 WE ARE sad to announce the passing of our

Congratulations to Andrew McIntosh on

winning a silver medal at the 1st European Winter

Games in Monaco; Nicola Smith on winning the

Paske on winning the National Teams Point a Board final; and

Emile Lawy and Richard Spencer on winning the EBU

We are saddened to announce the passing of our Vice

and in 1999 he was EBU National Pairs champion.

IN 2017 the Norfolk Contract Bridge

Association will host a team from Ireland in the

between Ireland and England. On 6 Feb a Quiz

was held to raise funds for the event.

The NCBA and its affiliated clubs continue to place

the general public can avail themselves of a wide variety of

courses on offer from beginners and improvers to advanced,

private coaching and masterclasses. Details can normally be

found via your local club or by an internet search.

attending from Norfolk and surrounding counties.

WE REGRET to record that after more than 40

resigned from the EBU/NEBA because the

the club no longer viable.

Diary dates: The 2016 NEBA Congress will be held in the

fine bridge facility at the Marriott Metro-Centre Hotel from

Swiss Teams, will be green pointed.

Congratulations to Ankush Khandelwar who

won the Open Pairs at the Lonon Year End Congress.

second; in the Mixed Pairs Glyn Liggins was second and Terry

Hewett third; and in the Open Pairs Toby Nonnenmacher

At the National Teams Congress, Richard Bowley won the

CONGRATULATIONS to John Holland who

has won the Sunday Telegraph Salver for the

most Master Points accumulated in the

took place on 7 Feb at Altrincham Bridge Club. There was a

good turn out of ten teams, with Manchester (Burgess)

winning comfortably ahead of Cheadle Hulme. They go on

to represent Manchester in the Garden Cities competition

which was won by Manchester last year. The intermediate cup

went to Altrincham (Fitzgerald) who were sixth. Stretford

Bridge Club who have recently affiliated to the EBU sent a

team for the first time

Commins were 4th. These four then teamed

up to finish a creditable 3rd in the Swiss teams.