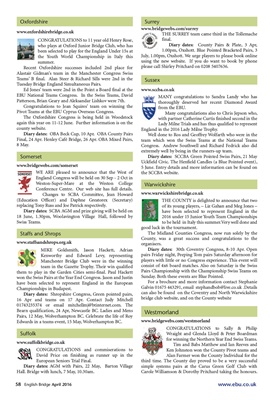 who plays at Oxford Junior Bridge Club, who has

been selected to play for the England Under 15s at

the Youth World Championship in Italy this

Teams' B final. Alan Steer & Richard Sills were 2nd in the

Congratulations to Jean Squires' team on winning the

The Oxfordshire Congress is being held in Woodstock

again this year on 11-12 June. Further information is on the

WE ARE pleased to announce that the West of

England Congress will be held on 30�Sep - 2 Oct in

Weston-Super-Mare at the Weston College

Diary dates: SCBA AGM and prize giving will be held on

Manchester Bridge Club were in the winning

team in the Gazette Tromitchellmj@btinternet.com/p>

them to play in the Garden Cities semi-final. Paul Hackett

won the Swiss Pairs at the Year End Congress. Jason and Justin

have been selected to represent England in the European

Pairs, 12 May, Wolverhampton BC. Celebrate the life of Roy

Edwards in a teams event, 15 May, Wolverhampton BC.

CONGRATULATIONS and commiserations to

David Price on finishing as runner up in the

THE SURREY team came third in the Tollemache

using the new website. If you do want to book by phone

MANY congratulations to Sandra Landy who has

Many congratulations also to Chris Jepson who,

with partner Catherine Curtis finished second in the

Lady Milne Trials and has thus qualified to represent

England in the 2016 Lady Milne Trophy.

Well done to Ros and Geoffrey Wolfarth who were in the

team which won the Swiss Teams at the National Teams

extremely well by being in the runners-up team.

5 June. Entry details and more information can be found on

THE COUNTY is delighted to astephandbob@live.co.uk>of its young players, - Liz Gahan and Meg Jones -

have been selected to represent England in the

to be held in Italy this summer.very well done and

good luck in the tournament.

The Midland Counties Congress, now run solely by the

County, was a great success and congratulations to the

players with little or no Congress experience. This event will

consist of 4x6 board matches. Also on Saturday is the Swiss

Sunday. Both these events are Blue Pointed.

can also be found on the Coventry and North Warwickshire

Tim and Babs Matthew and Ian Reeves and

Alan Farmer won the County Individual for the

third time. The County day proved to be a very successful

simple systems pairs at the Carus Green Golf Club with