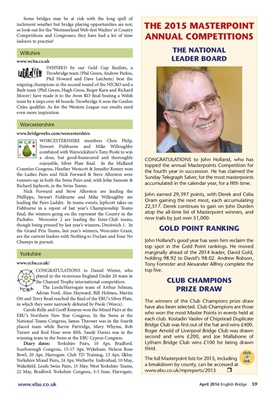 Some bridges may be at risk with the long spell of

inclement weather but bridge playing opportunities are not,

so look out for the 'Westmorland Web-feet Waders' at County

Competitions and Congresses; they have had a lot of time

INSPIRED by our Gold Cup finalists, a

reigning champions in the second round of the NICKO and a

team by 4 imps over 48 boards. Trowbridge A won the Garden

Cities qualifier. As for the Western League our results need

a close, but good-humoured and thoroughly

the Ladies Pairs and Nick Forward & Steve Allerston were

runners-up in both the Swiss Pairs and, with John Sansom &

Richard Jephcott, in the Swiss Teams.

Nick Forward and Steve Allerston are leading the

leading the Pairs Ladder. In teams events, Jephcott takes on

Fishburne in a repeat of last year's Championship Teams

final, the winners going on the represent the County in the

though being pressed by last year's winners, Droitwich 1. In

are the current leaders with Nothing to Declare and Four No

CONGRATULATIONS to Daniel Winter, who

played in the victorious England Under 20 team in

The Leeds/Harrogate team of Arthur Selman,

Ott and Terry Read reached the final of the EBU's Silver Plate,

in which they were narrowly defeated by Poole (Worcs).

Carole Kelly and Geoff Kenyon won the Mixed Pairs at the

EBU's Northern New Year Congress. In the Swiss at the

National Teams Congress, James Thrower was in the fourth

Turner and Rod Hose were fifth. Sandy Davies was in the

winning team in the Swiss at the EBU Cyprus Congress.

CONGRATULATIONS to John Holland, who has

topped the annual Masterpoints Competition for

the fourth year in succession. He has claimed the

Sunday Telegraph Salver, for the most masterpoints

accumulated in the calendar year, for a fifth time.

Oram gaining the next most, each accumulating

John Holland's good year has seen him reclaim the

top spot in the Gold Point rankings. He moved

marginally ahead of the 2014 leader, David Gold,

The winners of the Club Champions prize draw

have also been selected. Club Champions are those

who won the most Master Points in events held at

Bridge Club was first out of the hat and wins £400.

second and wins £200, and Joe Mallabone of

The full Masterpoint lists for 2015, including

a breakdown by county, can be accessed at