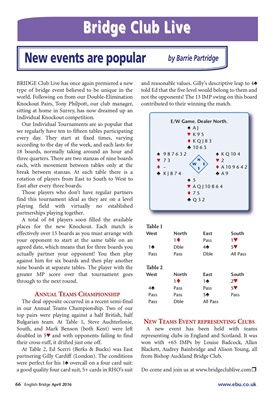 on 14 Jan was won by Keith Rayford, Simon

In the County Leagues Hartley head

In the two most recent Western League matches Avon has

been in fine form. Against Hereford there were wins for all

A division having won all of its matches.

The County qualifier for the Garden Cities was won by the

Rickard & David Jones who qualify for the regional final in

The qualifier for the Avon County Pairs was won by Ana

Jane Knight was the winner of Highfield Bridge Club's

THE FALMOUTH Salver, excellently hosted by

Buckingham in second place. On the same day, The Tredova

Cup, for players below Star Master, was won by Norman

runners-up. The County Teams of Four Championship was

SADLY our Multiple Teams had to be cancelled as the

dreadful flooding disrupted the roads and the venue was

under at least six feet of water.

Owing to Eden Club still being repaired after the flood

damage, the County Championship Pairs was played at the

John MacLachlan. However, the first pair who qualify for

entry to the Corwen are Sam Norman & Alan Anderson.

by Mike Douglas & Paul Knighton. The

Morton. The Xmas Pairs was won by Trevor Pilkington &

of the Simeon Cup (below National Master)

CONGRATULATIONS to all the following - South

CONGRATULATIONS to the winners of our