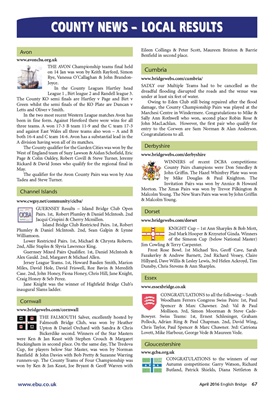 and Ian Constable who won the County Individual.

won the Humble Plate on 10 Jan.

Base who won the Championship pairs semifinal

KCBA Club Teams of 8 - Congratulations to

Chislehurst BC 'A' team winners of the Corbett

the Corbett Plate (Div 2) and to Farnborough

BC 'D' team winners of the Mitchell Salver (Div

3) and runners up Tunbridge Wells BC 'C' team. Both teams

will be promoted to the Corbett Plate.

In conjunction with KCBA, the last in the series of EBED

Tournament Directors courses will be on 19 Apr

(Assessment). Applications should be made to Peter

Jordan/Dawn Mertens at EBU. The Saturday dates booked at

Beasley vs Bowyer ; Cook vs Preston.

This was reduced to 14 pairs for the forthcoming final and

was well directed by Helen Barr.

THE PALMER Bayer No Fear Pairs attracted a

In the Ian Gardiner Trophy qualifier, the leading three

IN THE Manchester Congress held in early

third. The teams was won by Rodney Lighton

Progress Cup on the Saturday was won by Sue Jones & Carol

Straffon and the Kevin Comrie Cup on the Sunday was won

The LCBA Butler Pairs was won by Bernard & Rhona

At the Chester Congress in Deva the teams was won by

on 7 Feb and will represent MCBA in the Garden Cities

Regional Final in May.