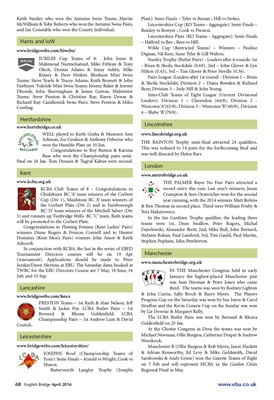 COUNTY trials - an excellent turnout of 20

THERE were three events in January, starting

with the Norfolk Championship Teams - the

winners on the day were Paul Darby, Simon

Budd, Giles & Gabriel Ip. This is our qualifier

for the EBU Pachabo Cup but the winners first

have to succeed in a play off against second placed Matt

Next was the Committee Cup - nine teams of eight with

all players below the rank of Regional Master. The winners

from the Noverre Club were James Tullett, Trish Raywood,

Tony Metcalf and Paul Quinn. We are concerned that some

clubs are unable to field teams because of the entry

restrictions; the Tournament Committee is reviewing how we

can maintain both numbers of entrants and the philosophy of

event with 20 teams - the winners being Roger Amey, Michael

Our next big event is the Norfolk Congress from 1-3 Apr.

I hope as many as possible from Norfolk and beyond will

come to what has become known as a very friendly Congress.

MANY congratulations go to the team of Anne

winners of the 2016 Niman Israel Cup (for mixed

teams - each player required to play a set in turn

with each of his/her three team mates). Their score of +57

Mike Stanbury (+34 IMPs). Very much clear winners of the

behind were Brian Pacey & Susan Green with 59.83% tying

for third place with Brenda Osborne and Frank Springett.

Congratulations go to all successful players.

IN THE Winter Pairs, held on the second

After the qualifying round the top seeds for county teams

are Auld and Crook.

THE OBA County Pairs semi-final was won by

pairs qualified for the final which takes place on 24

Apr at the Oxford Bridge Club.

CONGRATULATIONS to the winners of the Coda

Runners up Cathy May & Sheila Berringer with

the Swiss Pairs at Woolavington Village Hall 10 Jan were Steve

The Congress, a green pointed event, is taking place at the

Park Inn at Telford again this year on 16-17 Apr. Day one will

host the Swiss Pairs and day two the Swiss Teams.

The County Championship Pairs (Bearn) is to be held at

Newcastle on 24 Apr- a new venture in two ways, firstly as a

direct entry event and, secondly, is located away from County

HQ for the benefit of those in the North of the County. The

Ladies' & Men's Championship Pairs are to be held at

Wolverhampton on 12 May. A Teams of Four competition is

being held at Wolverhampton on 15 May to celebrate the

outstanding contribution made by Roy Edwards to the game

The top three in the Suffolk Mid-Anglia Pairs were: