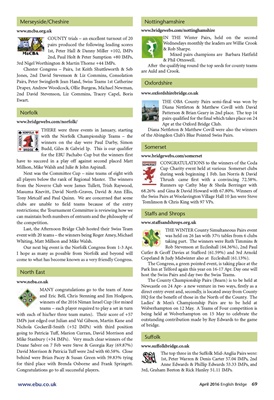 A TEAM from Richmond won the County heat of

the Garden Cities and will represent Surrey at the

regional final in May. Winners of the Mixed Pairs

Many congratulations to the following SCCBA

the SCCBA Mixed Pairs. In second place were Neil

Watts & Chris Jepson and in third place were George

Trophy for players who have less than 10,000 master points.

Robert Hirst & Sue Porter were second and third were Tim &

James Bugden & Bill Nicolle (West Sussex BC) are the

confirmed winners of the Charity Simultaneous Pairs. The

and in third place were Barbara Miles & Jean Meneely

the New Year Swiss Teams. In second place were Richard

and in 3rd place were Gerry Stanford, Dave Franklin, Neil

Congratulations to the following in their results in

be traced back to the 1970s when he played in

Warwickshire with his friends Roger Flood and Pip

Whitehouse. He won the County Championship

event, and was County Secretary for a number of

Pairs Championship and then the Perry Shield

(mid-Wales winning for the first time ever) with

John Waller. He went on to win the Webber Cup

and the Welsh teams of Eight with John, Keith

Shuttleworth and Brian Nicholls. He also won the

Arriving in Worcestershire in 2013, Roger soon

established himself as a force within the county,

winning the Championship Pairs at his first attempt

and helping the County to qualify for the

Tollemache final for the first time in over 25 years.

He initiated a mentoring scheme to bring on

completed its pilot phase and, as it continues into

2016, will form a permanent reminder of how much

he contributed to the county's bridge in the short

time that he lived in Worcestershire.

for many decades. He was one of the few old school

bridge players left who were specialists in both

rubber and teams bridge. At rubber bridge, in

addition to his bridge skills, he was able to exercise

the courtesy and temperament necessary to succeed

in the high stakes game, which he indulged in

regularly over the years, whilst his club moved

through the transitions of being Crockfords,

Eccentric, St James and then TGRs.

In teams bridge he represented Cambridge in the

Varsity match in 1952 and continued his allegiance

in Alumni matches until very recently. In Surrey he

national level he won the Hubert Phillips in 1972,

April 8th is the closing

date for the submission

of county reports for

the next issue of