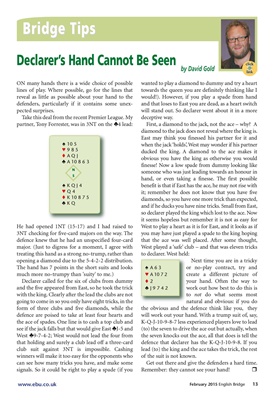 ON many hands there is a wide choice of possible

lines of play. Where possible, go for the lines that

reveal as little as possible about your hand to the

defenders, particularly if it contains some unex pected

Take this deal from the recent Premier League. My

partner, Tony Forrester, was in 3NT on the ®4 lead:

3NT checking for five-card majors on the way. The

defence knew that he had an unspecified four-card

major. (Just to digress for a moment, I agree with

treating this hand as a strong no-trump, rather than

The hand has 7 points in the short suits and looks

Declarer called for the six of clubs from dummy

and the five appeared from East, so he took the trick

with the king. Clearly after the lead the clubs are not

going to come in so you only have eight tricks, in the

form of three clubs and five dia monds, while the

defence are poised to take at least four hearts and

the ace of spades. One line is to cash a top club and

that holding and surely a club lead off a three-card

winners will make it too easy for the oppo nents who

can see how many tricks you have, and make some

signals. So it could be right to play a spade (if you

wanted to play a diamond to dummy and try a heart

towards the queen you are definitely thinking like I

would!). However, if you play a spade from hand

and that loses to East you are dead, as a heart switch

will stand out. So declarer went about it in a more

First, a diamond to the jack, not the ace - why? A

diamond to the jack does not reveal where the king is.

East may think you finessed his partner for it and

when the jack 'holds', West may wonder if his partner

ducked the king. A diamond to the ace makes it

obvious you have the king as otherwise you would

finesse! Now a low spade from dummy look ing like

someone who was just leading towards an honour in

hand, or even taking a finesse. The first possible

benefit is that if East has the ace, he may not rise with

it; remember he does not know that you have five

dia monds, so you have one more trick than expected,

and if he ducks you have nine tricks. Small from East,

so declarer played the king which lost to the ace. Now

it seems hopeless but remember it is not as easy for

West to play a heart as it is for East, and it looks as if

you may have just played a spade to the king hoping

that the ace was well placed. After some thought,

West played a 'safe' club - and that was eleven tricks

to declarer. West held: Next time you are in a tricky

or no-play contract, try and

create a different picture of

your hand. Often the way to

work out how best to do this is

to not do what seems most

natural and obvious: if you do

the obvious and the defence think like you, they

will work out your hand. With a trump suit of, say,

(to) the seven to drive the ace out but actually, when

the seven knocks out the ace, all that does is tell the

lead (to) the king and the ace takes the trick, the rest

of the suit is not known.

Get out there and give the defenders a hard time.