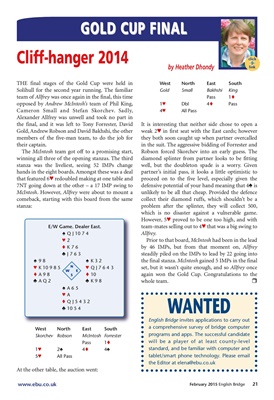 THE final stages of the Gold Cup were held in

Solihull for the second year running. The familiar

team of Allfrey was once again in the final, this time

Alexander Allfrey was unwell and took no part in

the final, and it was left to Tony Forrester, David

Gold, Andrew Robson and David Bakhshi, the other

members of the five-man team, to do the job for

The McIntosh team got off to a promising start,

winning all three of the opening stanzas. The third

hands in the eight boards. Amongst these was a deal

that featured 6™ redoubled making at one table and

McIntosh. However, Allfrey were about to mount a

comeback, starting with this board from the same

At the other table, the auction went:

It is interesting that neither side chose to open a

weak 2™ in first seat with the East cards; however

they both soon caught up when partner overcalled

in the suit. The aggressive bidding of Forrester and

Robson forced Skorchev into an early guess. The

diamond splinter from partner looks to be fitting

well, but the doubleton spade is a worry. Given

partner's initial pass, it looks a little optimistic to

proceed on to the five level, especially given the

defensive potential of your hand meaning that 4´ is

unlikely to be all that cheap. Provided the defence

collect their diamond ruffs, which shouldn't be a

problem after the splinter, they will collect 500,

which is no disaster against a vulnerable game.

However, 5™ proved to be one too high, and with

Prior to that board, McIntosh had been in the lead

by 46 IMPs, but from that moment on, Allfrey

steadily piled on the IMPs to lead by 22 going into

the final stanza. McIntosh gained 5 IMPs in the final

set, but it wasn't quite enough, and so Allfrey once

again won the Gold Cup. Congratulations to the

a comprehensive survey of bridge computer

programs and apps. The successful candidate

will be a player of at least county-level

standard, and be familiar with compelena@ebu.co.uktablet/smart phone technology. Please email