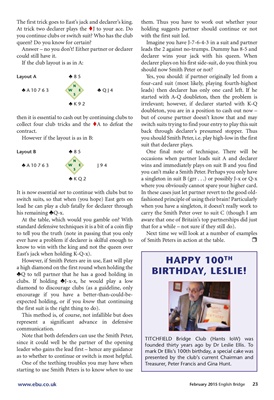 The first trick goes to East's jack and declarer's king.

At trick two declarer plays the tJ to your ace. Do

you continue clubs or switch suit? Who has the club

queen? Do you know for certain?

Answer - no you don't! Either partner or declarer

could still have it.

If the club layout is as in A:

then it is essential to cash out by continuing clubs to

collect four club tricks and the tA to defeat the

However if the layout is as in B:

It is now essential not to continue with clubs but to

switch suits, so that when (you hope) East gets on

lead he can play a club fatally for declarer through

At the table, which would you gamble on? With

standard defensive techniques it is a bit of a coin flip

to tell you the truth (note in passing that you only

ever have a problem if declarer is skilful enough to

know to win with the king and not the queen over

However, if Smith Peters are in use, East will play

a high diamond on the first round when holding the

®Q to tell partner that he has a good holding in

clubs. If holding ®J-x-x, he would play a low

diamond to discourage clubs (as a guideline, only

encourage if you have a better-than-could-beexpected

holding, or if you know that continuing

the first suit is the right thing to do).

This method is, of course, not infallible but does

represent a significant advance in defensive

Note that both defenders can use the Smith Peter,

since it could well be the partner of the opening

leader who gains the lead first - hence any guidance

as to whether to continue or switch is most helpful.

One of the teething troubles you may have when

starting to use Smith Peters is to know when to use

them. Thus you have to work out whether your

holding suggests partner should continue or not

with the first suit led.

leads the 2 against no-trumps. Dummy has 8-5 and

declarer wins your jack with his queen. When

declarer plays on his first side-suit, do you think you

should now Smith Peter or not?

Yes, you should: if partner originally led from a

leads) then declarer has only one card left. If he

started with A-Q doubleton, then the problem is

irrelevant; however, if declarer started with K-Q

doubleton, you are in a position to cash out now -

but of course partner doesn't know that and may

switch suits trying to find your entry to play this suit

back through declarer's presumed stopper. Thus

you should Smith Peter, i.e. play high-low in the first

One final note of technique. There will be

occasions when partner leads suit A and declarer

wins and immediately plays on suit B and you find

you can't make a Smith Peter. Perhaps you only have

where you obviously cannot spare your higher card.

In these cases just let partner revert to the good oldfashioned

principle of using their brain! Particularly

when you have a singleton, it doesn't really work to

carry the Smith Peter over to suit C (though I am

aware that one of Britain's top partnerships did just

that for a while - not sure if they still do).

Next time we will look at a number of examples

of Smith Peters in action at the table. r

founded thirty years ago by Dr Leslie Ellis. To

presented by the club's current Chairman and