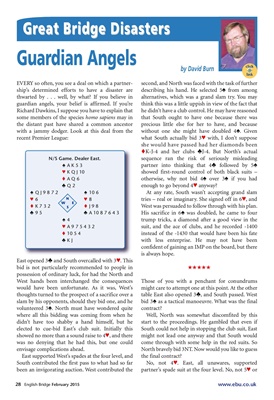 EVERY so often, you see a deal on which a partner ship's

determined efforts to have a disaster are

guardian angels, your belief is affirmed. If you're

Richard Dawkins, I suppose you have to explain that

some members of the species homo sapiens may in

the distant past have shared a common ancestor

with a jammy dodger. Look at this deal from the

East opened 3® and South overcalled with 3™. This

bid is not particularly recommended to people in

possession of ordinary luck, for had the North and

would have been unfortunate. As it was, West's

thoughts turned to the prospect of a sacrifice over a

slam by his opponents, should they bid one, and he

volunteered 3´. North must have wondered quite

where all this bidding was coming from when he

didn't have too shabby a hand himself, but he

showed no more than a sound raise to 4™, and there

was no denying that he had this, but one could

East supported West's spades at the four level, and

South contributed the first pass to what had so far

been an invigorating auction. West contributed the

second, and North was faced with the task of further

describing his hand. He selected 5´ from among

alternatives, which was a grand slam try. You may

he didn't have a club control. He may have reasoned

that South ought to have one because there was

precious little else for her to have, and because

what South actually bid 3™ with, I don't suppose

she would have passed had her diamonds been

partner into thinking that 4® followed by 5´

enough to go beyond 4™ anyway?

tries - real or imaginary. She signed off in 6™, and

West was persuaded to follow through with his plan.

His sacrifice in 6´ was doubled, he came to four

trump tricks, a diamond after a good view in the

instead of the -1430 that would have been his fate

with less enterprise. He may not have been

confident of gaining an IMP on the board, but there

Those of you with a penchant for conundrums

might care to attempt one at this point. At the other

bid 3´ as a tactical manoeuvre. What was the final

Well, North was somewhat discomfited by this

start to the proceedings. He gambled that even if

South could not help in stopping the club suit, East

might not lead one anyway and that South would

come through with some help in the red suits. So

North bravely bid 3NT. Now would you like to guess

No, not 4™. East, all unawares, supported

partner's spade suit at the four level. No, not 5™ or