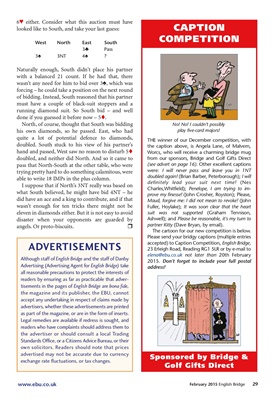 6™ either. Consider what this auction must have

looked like to South, and take your last guess:

with a balanced 21 count. If he had that, there

wasn't any need for him to bid over 3´, which was

forcing - he could take a position on the next round

of bidding. Instead, South reasoned that his partner

must have a couple of black-suit stoppers and a

done if you guessed it before now - 5t.

North, of course, thought that South was bidding

his own diamonds, so he passed. East, who had

quite a lot of potential defence to diamonds,

doubled. South stuck to his view of his partner's

hand and passed, West saw no reason to disturb 5t

doubled, and neither did North. And so it came to

pass that North-South at the other table, who were

trying pretty hard to do something calamitous, were

able to write 18 IMPs in the plus column.

I suppose that if North's 3NT really was based on

what South believed, he might have bid 4NT - he

did have an ace and a king to contribute, and if that

wasn't enough for ten tricks there might not be

eleven in diamonds either. But it is not easy to avoid

disaster when your opponents are guarded by

Although staff of English Bridge and the staff of Danby

all reasonable precautions to protect the interests of

readers by ensuring as far as practicable that advertisements

in the pages of English Bridge are bona fide,

the magazine and its publisher, the EBU, cannot

accept any undertaking in respect of claims made by

advertisers, whether these advertisements are printed

as part of the magazine, or are in the form of inserts.

Legal remedies are available if redress is sought, and

readers who have complaints should address them to

the advertiser or should consult a local Trading

Standards Office, or a Citizens Advice Bureau, or their

own solicitors. Readers should note that prices

advertised may not be accurate due to currency

THE winner of our December com pe ti tion, with

the cap tion above, is Angela Lane, of Malvern,

Worcs, who will re ceive a charming bridge mug

from our sponsors, Bridge and Golf Gifts Direct

were: I will never pass and leave you in 1NT

Charles,Whitfield); Penelope, I am trying to im prove

Maud, forgive me: I did not mean to revoke! (John

Fuller, Hoylake); It was soon clear that the heart

suit was not supported (Graham Tennison,

Ashwell); and Please be reasonable, it's my turn to

The cartoon for our new com pe ti tion is below.

elena@ebu.co.uk not later than 20th February

2015. Don't forget to include your full postal

No! No! I couldn't possibly