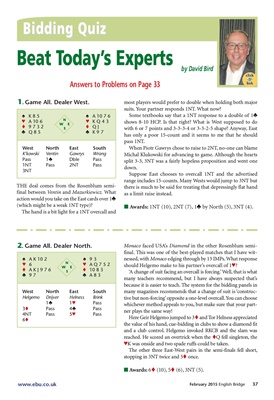 1.game All. Dealer West . most players would prefer to double when holding both major

shows 8-10 HCP. Is that right? What is West supposed to do

When Piotr Gawrys chose to raise to 2NT, no-one can blame

Michal Klukowski for advancing to game. Although the hearts

split 3-3, 3NT was a fairly hopeless proposition and went one

Suppose East chooses to overcall 1NT and the advertised

range includes 15-counts. Many Wests would jump to 3NT but

as a limit raise instead.

Monaco faced USA's Diamond in the other Rosenblum semifinal.

This was one of the best-played matches that I have witnessed,

with Monaco edging through by 13 IMPs. What response

should Helgemo make to his partner's overcall of 1™?

'A change of suit facing an overcall is forcing.' Well, that is what

many teachers recommend, but I have always suspected that's

because it is easier to teach. The system for the bidding panels in

many magazines recommends that a change of suit is 'construc tive

but non-forcing' opposite a one-level overcall. You can choose

whichever method appeals to you, but make sure that your part ner

the value of his hand, cue-bidding in clubs to show a diamond fit

and a club control. Helgemo invoked RKCB and the slam was

reached. He scored an overtrick when the tQ fell singleton, the

™K was onside and two spade ruffs could be taken.

The other three East-West pairs in the semi-finals fell short,

stopping in 3NT twice and 5t once.

Answers to Problems on Page 33

THE deal comes from the Rosenblum semifinal

between Ventin and Mazurkiewicz. What

action would you take on the East cards over 1®

The hand is a bit light for a 1NT overcall and