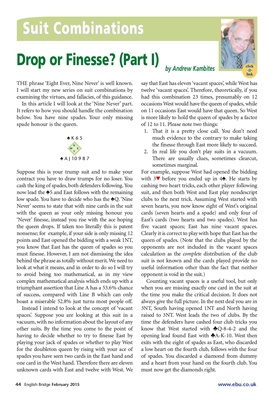 THE phrase 'Eight Ever, Nine Never' is well known.

I will start my new series on suit combinations by

examining the virtues, and fallacies, of this guidance.

In this article I will look at the 'Nine Never' part.

It refers to how you should handle the combination

below. You have nine spades. Your only missing

spade honour is the queen.

Suppose this is your trump suit and to make your

contract you have to draw trumps for no loser. You

cash the king of spades, both defenders following. You

now lead the ´5 and East follows with the remaining

low spade. You have to decide who has the ´Q. 'Nine

Never' seems to state that with nine cards in the suit

with the queen as your only missing honour you

'Never' finesse, instead you rise with the ace hoping

the queen drops. If taken too literally this is patent

nonsense; for example, if your side is only missing 12

points and East opened the bidding with a weak 1NT,

you know that East has the queen of spades so you

must finesse. However, I am not dismissing the idea

behind the phrase as totally without merit. We need to

look at what it means, and in order to do so I will try

to avoid being too mathe matical, as in my view

complex mathe matical analysis which ends up with a

triumphant assertion that Line A has a 53.6% chance

of success, compared with Line B which can only

boast a miser able 52.8% just turns most people off.

Instead I intend to look at the concept of 'vacant

spaces'. Suppose you are looking at this suit in a

vacuum, with no information about the layout of any

other suits. By the time you come to the point of

having to decide whether to try to finesse East by

playing your jack of spades or whether to play West

for the doubleton queen by rising with your ace of

spades you have seen two cards in the East hand and

one card in the West hand. Therefore there are eleven

unknown cards with East and twelve with West. We

say that East has eleven 'vacant spaces', while West has

had this combination 23 times, presumably on 12

occasions West would have the queen of spades, while

on 11 occasions East would have that queen. So West

1. That it is a pretty close call. You don't need

much evidence to the contrary to make taking

the finesse through East more likely to succeed.

2. In real life you don't play suits in a vacuum.

There are usually clues, sometimes clearcut,

For example, suppose West had opened the bidding

suit, and then both West and East play nondescript

clubs to the next trick. Assuming West started with

cards (seven hearts and a spade) and only four of

queen of spades. (Note that the clubs played by the

opponents are not included in the vacant spaces

calculation as the complete distribution of the club

suit is not known and the cards played provide no

useful information other than the fact that neither

opponent is void in the suit.)

Counting vacant spaces is a useful tool, but only

when you are missing exactly one card in the suit at

the time you make the critical decision. It does not

always give the full picture. In the next deal you are in

3NT, South having opened 1NT and North having

raised to 3NT. West leads the two of clubs. By the

time the defenders have cashed four club tricks you

exits with the eight of spades as East, who discarded

a low heart on the fourth club, follows with the four

of spades. You discarded a diamond from dummy

and a heart from your hand on the fourth club. You

must now get the diamonds right.

Drop or Finesse? (Part I) by Andrew Kambites