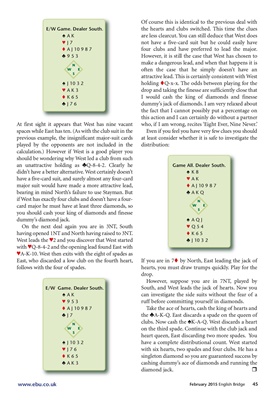 At first sight it appears that West has nine vacant

spaces while East has ten. (As with the club suit in the

played by the opponents are not included in the

calculation.) However if West is a good player you

should be wondering why West led a club from such

an unattractive holding as ®Q-8-4-2. Clearly he

have a five-card suit, and surely almost any four-card

major suit would have made a more attractive lead,

bearing in mind North's failure to use Stayman. But

if West has exactly four clubs and doesn't have a fourcard

major he must have at least three diamonds, so

you should cash your king of diamonds and finesse

On the next deal again you are in 3NT, South

having opened 1NT and North having raised to 3NT.

West leads the ™2 and you discover that West started

™A-K-10. West then exits with the eight of spades as

East, who discarded a low club on the fourth heart,

follows with the four of spades.

Of course this is identical to the previous deal with

the hearts and clubs switched. This time the clues

are less clearcut. You can still deduce that West does

not have a five-card suit but he could easily have

four clubs and have preferred to lead the major.

However, it is still the case that West has chosen to

make a dangerous lead, and when that happens it is

often the case that he simply doesn't have an

attractive lead. This is certainly consistent with West

holding tQ-x-x. The odds between playing for the

drop and taking the finesse are sufficiently close that

I would cash the king of diamonds and finesse

dummy's jack of diamonds. I am very relaxed about

the fact that I cannot possibly put a percentage on

this action and I can certainly do without a partner

who, if I am wrong, recites 'Eight Ever, Nine Never.'

Even if you feel you have very few clues you should

at least consider whether it is safe to investigate the

If you are in 7t by North, East leading the jack of

hearts, you must draw trumps quickly. Play for the

However, suppose you are in 7NT, played by

South, and West leads the jack of hearts. Now you

can investigate the side suits without the fear of a

ruff before committing yourself in diamonds.

Take the ace of hearts, cash the king of hearts and

the ®A-K-Q. East discards a spade on the queen of

on the third spade. Continue with the club jack and

with six hearts, two spades and four clubs. He has a

singleton diamond so you are guaranteed success by

cashing dummy's ace of diamonds and running the