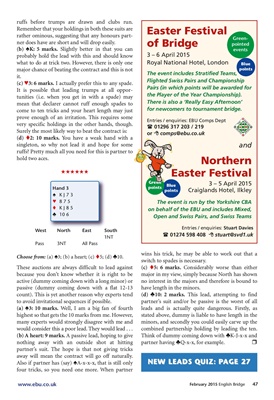 ruffs before trumps are drawn and clubs run.

Remember that your holdings in both these suits are

rather ominous, suggesting that any honours part ner

does have are short and will drop easily.

probably hold the lead with this and should know

what to do at trick two. However, there is only one

major chance of beating the contract and this is not

It is possible that leading trumps at all oppor tunities

come to ten tricks and your heart length may just

prove enough of an irritation. This requires some

very specific holdings in the other hands, though.

Surely the most likely way to beat the contract is:

singleton, so why not lead it and hope for some

ruffs? Pretty much all you need for this is partner to

These auctions are always difficult to lead against

because you don't know whether it is right to be

active (dummy coming down with a long minor) or

passive (dummy coming down with a flat 12-13

count). This is yet another reason why experts tend

to avoid invitational sequences if possible.

highest so that gets the 10 marks from me. However,

many experts would strongly disagree with me and

would consider this a poor lead. They would lead . . .

nothing away with an outside shot at hitting

partner's suit. The hope is that not giving tricks

away will mean the contract will go off naturally.

Also if partner has (say) ´A-x-x-x, that is still only

four tricks, so you need one more. When partner

wins his trick, he may be able to work out that a

switch to spades is necessary.

major in my view, simply because North has shown

no interest in the majors and therefore is bound to

have length in the minors.

partner's suit and/or be passive is the worst of all

leads and is actually quite dangerous. Firstly, as

stated above, dummy is liable to have length in the

minors, and secondly you could easily carve up the

Think of dummy coming down with ®K-J-x-x and

partner having ®Q-x-x, for example. r

Pairs (in which points will be awarded for

the Player of the Year Championship).

There is also a 'Really Easy Afternoon'

The event is run by the Yorkshire CBA