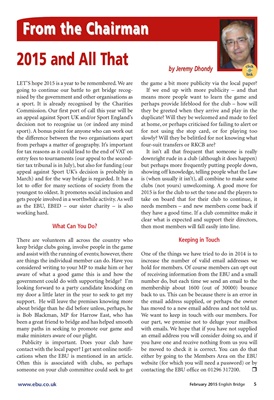 going to continue our battle to get bridge recog nised

by the government and other organisations as

a sport. It is already recognised by the Charities

Commis sion. Our first port of call this year will be

an appeal against Sport UK and/or Sport England's

decision not to recognise us (or indeed any mind

sport). A bonus point for anyone who can work out

the difference between the two organisations apart

from perhaps a matter of geography. It's important

entry fees to tournaments (our appeal to the secondtier

tax tribunal is in July), but also for funding (our

appeal against Sport UK's decision is probably in

March) and for the way bridge is regarded. It has a

lot to offer for many sections of society from the

youngest to oldest. It promotes social inclusion and

gets people involved in a worthwhile activity. As well

as the EBU, EBED - our sister charity - is also

working hard. What Can You Do?

There are volunteers all across the country who

and assist with the running of events; however, there

are things the individual member can do. Have you

considered writing to your MP to make him or her

aware of what a good game this is and how the

government could do with supporting bridge? I'm

looking forward to a party candidate knocking on

support. He will leave the premises knowing more

about bridge than he did before unless, perhaps, he

is Bob Blackman, MP for Harrow East, who has

been a great friend to bridge and has helped smooth

many paths in seeking to promote our game and

make ministers aware of our plight.

Publicity is important. Does your club have

contact with the local paper? I get sent online notifi cations

when the EBU is mentioned in an article.

Often this is associated with clubs, so perhaps

someone on your club committee could seek to get

the game a bit more publicity via the local paper?

If we end up with more publicity - and that

means more people want to learn the game and

perhaps provide lifeblood for the club - how will

they be greeted when they arrive and play in the

duplicate? Will they be welcomed and made to feel

at home, or perhaps criticised for failing to alert or

for not using the stop card, or for playing too

slowly? Will they be belittled for not knowing what

four-suit transfers or RKCB are?

It isn't all that frequent that someone is really

downright rude in a club (although it does happen)

showing off knowledge, telling people what the Law

is (when usually it isn't), all combine to make some

clubs (not yours) unwelcoming. A good move for

take on board that for their club to continue, it

needs members - and new members come back if

they have a good time. If a club committee make it

clear what is expected and support their directors,

then most members will fall easily into line.

increase the number of valid email addresses we

hold for members. Of course members can opt out

of receiving information from the EBU and a small

number do, but each time we send an email to the

back to us. This can be because there is an error in

the email address supplied, or perhaps the owner

has moved to a new email address and not told us.

We want to keep in touch with our members. For

our part, we promise not to deluge your mailbox

with emails. We hope that if you have not supplied

an email address you will consider doing so, and if

you have one and receive nothing from us you will

be moved to check it is correct. You can do that

either by going to the Members Area on the EBU

2015 and All That by Jeremy Dhondy