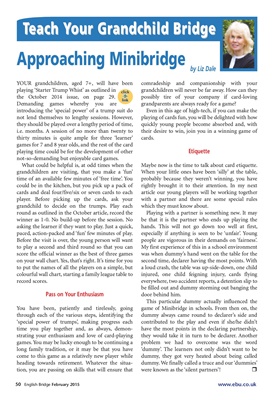 YOUR grandchildren, aged 7+, will have been

Demanding games whereby you are

introducing the 'special power' of a trump suit do

not lend themselves to lengthy sessions. However,

they should be played over a lengthy period of time,

i.e. months. A session of no more than twenty to

thirty minutes is quite ample for three 'learner'

games for 7 and 8 year olds, and the rest of the card

playing time could be for the development of other

What could be helpful is, at odd times when the

grandchildren are visiting, that you make a 'fun'

time of an available few minutes of 'free time'. You

could be in the kitchen, but you pick up a pack of

cards and deal four/five/six or seven cards to each

player. Before picking up the cards, ask your

grandchild to decide on the trumps. Play each

round as outlined in the October article, record the

winner as 1-0. No build-up before the session. No

asking the learner if they want to play. Just a quick,

Before the visit is over, the young person will want

to play a second and third round so that you can

score the official winner as the best of three games

on your wall chart. Yes, that's right. It's time for you

to put the names of all the players on a simple, but

Pass on Your Enthusiasm

You have been, patiently and tirelessly, going

through each of the various steps, identifying the

time you play together and, as always, demon strating

your enthusiasm and love of card-playing

games. You may be lucky enough to be continuing a

long family tradition, or it may be that you have

come to this game as a relatively new player while

heading towards retirement. Whatever the situa tion,

you are passing on skills that will ensure that

comradeship and companionship with your

grandchildren will never be far away. How can they

possibly tire of your company if card-loving

grandparents are always ready for a game?

Even in this age of high-tech, if you can make the

playing of cards fun, you will be delighted with how

their desire to win, join you in a winning game of

Maybe now is the time to talk about card etiquette.

When your little ones have been 'silly' at the table,

probably because they weren't winning, you have

rightly brought it to their attention. In my next

article our young players will be working together

with a partner and there are some special rules

which they must know about.

Playing with a partner is something new. It may

be that it is the partner who ends up playing the

hands. This will not go down too well at first,

especially if anything is seen to be 'unfair'. Young

people are vigorous in their demands on 'fairness'.

My first experience of this in a school environment

was when dummy's hand went on the table for the

second time, declarer having the most points. With

a loud crash, the table was up-side-down, one child

be filled out and dummy storming out banging the

This particular dummy actually influenced the

game of Minibridge in schools. From then on, the

dummy always came round to declarer's side and

contributed to the play and even if she/he didn't

have the most points in the declaring partnership,

they would take it in turn to be declarer. Another

problem we had to overcome was the word

'dummy'. The learners not only didn't want to be

dummy, they got very heated about being called

dummy. We finally called a truce and our 'dummies'

were known as the 'silent partners'! r