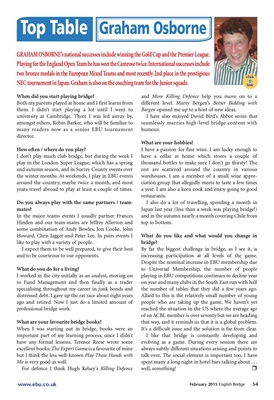 Both my parents played at home and I first learnt from

them. I didn't start playing a lot until I went to

university at Cambridge. There I was led astray by,

amongst others, Robin Barker, who will be familiar to

many readers now as a senior EBU tournament

I don't play much club bridge, but during the week I

play in the London Super League, which has a spring

and autumn season, and in Surrey County events over

the winter months. At week ends, I play in EBU events

around the country, maybe twice a month, and most

years travel abroad to play at least a couple of times.

Do you always play with the same partners / teammates?

In the major teams events I usually partner Frances

Hinden and our team-mates are Jeffrey Allerton and

Howard, Chris Jagger and Peter Lee. In pairs events I

I expect them to be well prepared, to give their best

and to be courteous to our opponents.

I worked in the city initially as an analyst, moving on

to Fund Management and then finally as a trader

specialising throughout my career in junk bonds and

distressed debt. I gave up the rat race about eight years

ago and retired. Now I just do a limited amount of

When I was starting out in bridge, books were an

important part of my learning process, since I didn't

have any formal lessons. Terence Reese wrote some

excellent books; The Expert Game is a favourite of mine

but I think the less well-known Play These Hands with

Me is very good as well.

and More Killing Defence help you move on to a

Bergen opened me up to a host of new ideas.

I have also enjoyed David Bird's Abbot series that

I have a passion for fine wine. I am lucky enough to

have a cellar at home which stores a couple of

thousand bottles to make sure I don't go thirsty! The

rest are scattered around the country in various

warehouses. I am a member of a small wine appre ciation

group that allegedly meets to taste a few times

a year. I am also a keen cook and enjoy going to good

I also do a lot of travelling, spending a month in

Japan last year (less than a week was playing bridge!)

and in the autumn nearly a month covering Chile from

By far the biggest challenge in bridge, as I see it, is

increasing participation at all levels of the game.

Despite the nominal increase in EBU membership due

to Universal Membership, the number of people

the number of tables that they did a few years ago.

Allied to this is the relatively small number of young

people who are taking up the game. We haven't yet

reached the situation in the US where the average age

of an ACBL member is over seventy but we are heading

that way, and it reminds us that it is a global problem.

It's a difficult issue and the solution is far from clear.

evolving as a game. During every session there are

talk over. The social element is important too, I have

spent many a long night in hotel bars talking about . . .

GRAHAM OSBORNE's national successes include winning the Gold Cup and the Premier League.

Playing for the England Open Team he has won the Camrose twice. International successes include

NEC tournament in Japan. Graham is also on the coaching team for the Junior squads.