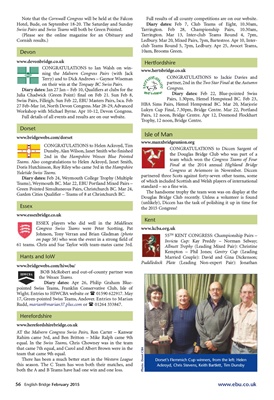 Note that the Cornwall Congress will be held at the Falcon

Hotel, Bude, on September 18-20. The Saturday and Sunday

Swiss Pairs and Swiss Teams will both be Green Pointed.

(Please see the online magazine for an Obituary and

the Malvern Congress Pairs (with Jack

on their win at the Torquay BC Swiss Pairs.

Full details of all events and results are on our website.

Doris Hutchinson, Roy Riley who came 3rd in the Hampshire

Garden Cities Qualifier - Teams of 8 at Christchurch BC.

ESSEX players who did well in the Middlesex

equal. In the Swiss Teams, Chris Chowney was in the team

that came 7th equal, and Carol and Albert Brown were in the

There has been a much better start in the Western League

this season. The C Team has won both their matches, and

both the A and B Teams have had one win and one loss.

CONGRATULATIONS to Jackie Davies and

partner, 2nd in the Two Star Final at the Autumn

CONGRATULATIONS to Diccen Sargent of

the Douglas Bridge Club who was part of a

team which won the Congress Teams of Four

Final at the 2014 annual Highland Bridge

Congress at Aviemore in November. Diccen

partnered three Scots against forty-seven other teams, some

of which included Scottish and Welsh players of international

standard - so a fine win.

The handsome trophy the team won was on display at the

Douglas Bridge Club recently. Unless a volunteer is found

(unlikely), Diccen has the task of polishing it up in time for