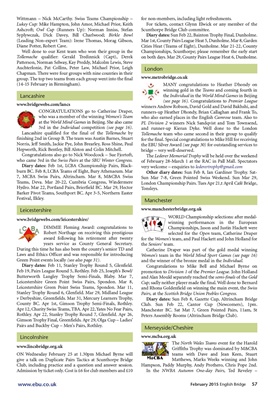 Chapman. There were four groups with nine counties in their

group. The top two teams from each group went into the final

who was a member of the winning Women's Team

at the World Mind Games in Beijing. She also came

Lancashire qualified for the final of the Tollemache by

finishing 2nd in Group B. The team was Austin Barnes, Stuart

who came 3rd in the Swiss Pairs at the SBU Winter Congress.

Robert Northage on receiving this prestigious

award following his retirement after twenty

Laws and Ethics Officer and was responsible for introducing

ON Wednesday February 25 at 1.30pm Michael Byrne will

give a talk on Duplicate Pairs Tactics at Scunthorpe Bridge

Club, including practice and a question and answer session.

Admission by ticket only. Cost is £6 for club members and £10

for non-members, including light refreshments.

For tickets, contact Glynn Elwick or any member of the

MANY congratulations to Heather Dhondy on

winning gold in the Teams and coming fourth in

the Individual in the World Mind Games in Beijing

who also earned places in the English Camrose team. Also to

and runner-up Kieran Dyke. Well done to lederertrophy@gmail.comache team who came second in their group to qualify

for the final. Special congratulations to Mike Hill for receiving

the EBU Silver Award (see page 30) for outstanding services to

The Lederer Memorial Trophy will be held over the weekend

of February 28-March 1 at the RAC in Pall Mall. Spectators

performances in the European

Championships, Jason and Justin Hackett were

for the Women's team, and Paul Hackett and John Holland for

Catherine Draper was part of the gold medal winning

and the winner of the bronze medal in the Individual.

Congratulations to Mike Bell and Michael Byrne on

promotion to Division 1 of the Premier League. John Holland

and Alan Mould separately reached the semi-finals of the Gold

Cup; sadly neither player made the final. Well done to Bernard

and Rhona Goldenfield on winning the main event, the Swiss

The North Wales Teams event for the Harold

Griffiths Trophy was dominated by M&CBA