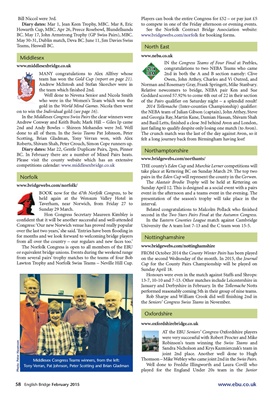 MANY congratulations to Alex Allfrey whose

Andrew McIntosh and Stefan Skorchev were in

the team which finished 2nd.

who were in the Women's Team which won the

gold in the World Mind Games. Nicola then went

on to win the Individual gold (see page 16).

In the Middlesex Congress Swiss Pairs the clear winners were

done to all of them. In the Swiss Teams Pat Johnson, Peter

BC. In February there are a number of Mixed Pairs heats.

Please visit the county website which has an extensive

BOOK now for the 47th Norfolk Congress, to be

held again at the Wensum Valley Hotel in

Taverham, near Norwich, from Friday 27 to

confident that it will be another successful and well-attended

over the last two years,' she said. 'Entries have been flooding in

for months and we look forward to welcoming bridge players

from all over the country - our regulars and new faces too.'

The Norfolk Congress is open to all members of the EBU

or equivalent bridge unions. Events during the weekend range

from several pairs' trophy matches to the teams of four Bob

to compete in one of the Friday afternoon or evening events.

IN the Congress Teams of Four Final at Peebles,

2nd in both the A and B section namely: Clive

of the Pairs qualifier on Saturday night - a splendid result!

and Basil Letts, finished a close 3rd behind Avon and London,

just failing to qualify despite only losing one match (to Avon).

The crunch match was the last of the day against Avon, so it

felt a long journey back from Birmingham having lost!

THE county's Eden Cup and Murchie Lerner competitions will

take place at Kettering BC on Sunday March 29. The top two

pairs in the Eden Cup will represent the county in the Corwen.

The Alastair Brodie Trophy will be held at Kettering on

Sunday April 12. This is designed as a social event with a pairs

pre sentation of the season's trophy will take place in the

second in the Two Stars Pairs Final at the Autumn Congress.

In the Eastern Counties League match against Cambridge

FROM October 2014 the County Winter Pairs has been played

on the second Wednesday of the month. In 2015, the Journal

Cup for the County Pairs Championship will be played on

Honours were even in the match against Staffs and Shrops:

January and Derbyshire in February. In the Tollemache Notts

performed reasonably coming 5th in their group of nine teams.

Rob Sharpe and William Crook did well finishing 2nd in

were very successful with Robert Procter and Mike

Well done to Freddie Illingworth and Laura Covill who

played for the England Under 20s team in the Junior