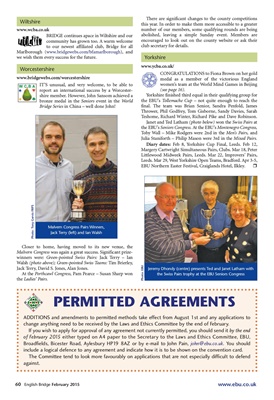 BRIDGE continues apace in Wiltshire and our

community has grown too. A warm welcome

to our newest affiliated club, Bridge for all

we wish them every success for the future.

IT'S unusual, and very welcome, to be able to

report an international success by a Worcester shire

member. However, John Sansom achieved a

bronze medal in the Seniors event in the World

Closer to home, having moved to its new venue, the

There are significant changes to the county competitions

this year. In order to make them more accessible to a greater

number of our members, some qualifying rounds are being

encouraged to look out on the county website or ask their

CONGRATULATIONS to Fiona Brown on her gold

medal as a member of the victorious England

women's team at the World Mind Games in Beijing

Yorkshire finished third equal in their qualifying group for

the EBU's Tollemache Cup - not quite enough to reach the

Janet and Ted Latham (photo below) won the Swiss Pairs at

the EBU's Seniors Congress. At the EBU's Montenegro Congress,

Toby Wall - Mike Rodgers were 2nd in the Men's Pairs, and

Julia Staniforth - Philip Mason were 3rd in the Mixed Pairs.

the Swiss Pairs trophy at the EBU Seniors Congress

change any thing need to be received by the Laws and Ethics Committee by the end of February.

If you wish to apply for approval of any agreement not currently permitted, you should send it by the end

of February 2015 either typed on A4 paper to the Secretary to the Laws and Ethics Committee, EBU,

Broad fields, Bicester Road, Aylesbury HP19 8AZ or by e-mail to John Pain, john@ebu.co.uk. You should

include a logical defence to any agreement and indicate how it is to be shown on the convention card.