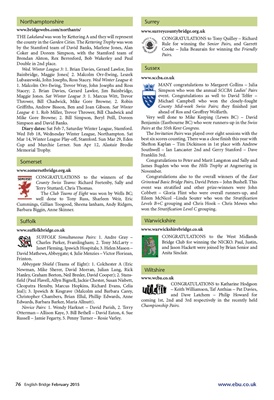 THE Lakeland was won by Kettering A and they will represent

the county in the Garden Cities. The Kettering Trophy was won

by the Stamford team of David Banks, Marlene Jones, Alan

Coker and Doreen Simpson, with the Stamford team of

CONGRATULATIONS to the winners of the

The Club Teams of Eight was won by Wells BC;

Rule for winning the Senior Pairs, and Garrett

MANY congratulations to Margaret Collins - Julia

Michael Campbell who won the closely-fought

ahead of Ros and Geoffrey Wolfarth.

Benjamin (Eastbourne BC) who were runners-up in the Swiss

Pairs at the 55th Kent Congress.

The Invitation Pairs was played over eight sessions with the

best six scores counting. There was a close finish this year with

Congratulations to Peter and Marit Langston and Sally and

James Bugden who won the Hills Trophy at Angmering in

Congratulations also to the overall winners of the East

event was stratified and other prize-winners were John

Cobbett - Gloria Flint who were overall runners-up, and

CONGRATULATIONS to the West Midlands

and Jason Hackett were joined by Brian Senior and

and Dave Latchem - Philip Howard for

coming 1st, 2nd and 3rd respectively in the recently held