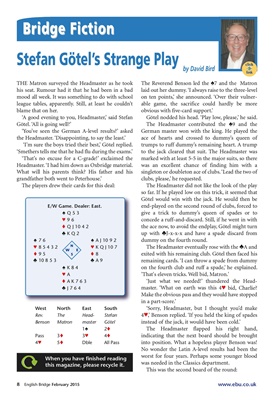 THE Matron surveyed the Headmaster as he took

his seat. Rumour had it that he had been in a bad

mood all week. It was something to do with school

blame that on her.

'A good evening to you, Headmaster,' said Stefan

Götel. 'All is going well?'

the Headmaster. 'Disappointing, to say the least.'

'I'm sure the boys tried their best,' Götel replied.

'Smethers tells me that he had flu during the exams.'

'That's no excuse for a C-grade!' exclaimed the

Headmaster. 'I had him down as Oxbridge material.

What will his parents think? His father and his

grandfather both went to Peterhouse.'

The players drew their cards for this deal:

The Reverend Benson led the ´7 and the Matron

laid out her dummy. 'I always raise to the three-level

on ten points,' she announced. 'Over their vul ner able

game, the sacrifice could hardly be more

The Headmaster contributed the ´9 and the

German master won with the king. He played the

ace of hearts and crossed to dummy's queen of

to the jack cleared that suit. The Headmaster was

marked with at least 5-5 in the major suits, so there

was an excellent chance of finding him with a

singleton or doubleton ace of clubs. 'Lead the two of

The Headmaster did not like the look of the play

so far. If he played low on this trick, it seemed that

Götel would win with the jack. He would then be

end-played on the second round of clubs, forced to

give a trick to dummy's queen of spades or to

concede a ruff-and-discard. Still, if he went in with

the ace now, to avoid the endplay, Götel might turn

dummy on the fourth round.

The Headmaster eventually rose with the ®A and

exited with his remaining club. Götel then faced his

remaining cards. 'I can throw a spade from dummy

on the fourth club and ruff a spade,' he explained.

'Just what we needed!' thundered the Head master.

'What on earth was this 4™ bid, Charlie?

Make the obvious pass and they would have stopped

4™,' Benson replied. 'If you held the king of spades

instead of the jack, it would have been cold.'

The Headmaster flapped his right hand,

indicating that the next board should be brought

into position. What a hopeless player Benson was!

No wonder the Latin A-level results had been the

was needed in the Classics department.

This was the second board of the round:

this magazine, please recycle it.