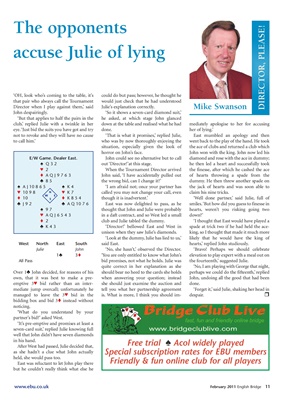 ‘OH, look who’s coming to the table, it’s could do but pass; however, he thought he

Director when I play against them,’ said Julie’s explanation correctly. Mike Swanson

John despairingly. ‘So it shows a seven-card diamond suit,’

‘But that applies to half the pairs in the he asked, at which stage John glanced

club,’ replied Julie with a twinkle in her down at the table and realised what he had mediately apologise to her for accusing

eye. ‘Just bid the suits you have got and try done. her of lying.’

not to revoke and they will have no cause ‘That is what it promises,’ replied Julie, East mumbled an apology and then

to call him.’ who was by now thoroughly enjoying the went back to the play of the hand. He took

situation, especially given the look of the ace of clubs and returned a club which

horror on John’s face. John won with the king. John now led his

E/W Game. Dealer East. John could see no alternative but to call diamond and rose with the ace in dummy;

´ Q32 out ‘Director!’at this stage. he then led a heart and successfully took

™ 2 When the Tournament Director arrived the finesse, after which he cashed the ace

t AQJ9763 John said, ‘I have accidentally pulled out of hearts throwing a spade from the

® 85 the wrong bid, can I change it?’ dummy. He then threw another spade on

´ 97 thought that John and Julie were probably hearts, weren’t you risking going two

t 2 club and Julie tabled the dummy. ‘I thought that East would have played a

® K43 ‘Director!’ bellowed East and West in spade at trick two if he had held the ace-

unison when they saw Julie’s diamonds. king, so I thought that made it much more

‘Look at the dummy, Julie has lied to us,’ likely that he would have the king of

Julie John ‘No, she hasn’t,’ observed the Director. ‘Bravo! Perhaps we should celebrate

All Pass bid promises, not what he holds. Julie was the fourteenth,’ suggested Julie.

quite correct in her explanation as she ‘No, I am playing with George that night,

Over 1® John decided, for reasons of his should bear no heed to the cards she holds perhaps we could do the fifteenth,’ replied

own, that it was best to make a pre- when answering your question; instead John, undoing all the good that had been

emptive 3™ bid rather than an inter- she should just examine the auction and done.

mediate jump overcall; unfortunately he tell you what her partnership agreement ‘Forget it,’ said Julie, shaking her head in

managed to leave the 3™ bid in the is. What is more, I think you should im- despair. r

bidding box and bid 3t instead without

‘What do you understand by your

‘It’s pre-emptive and promises at least a

held, she would pass too.

but he couldn’t really think what else he