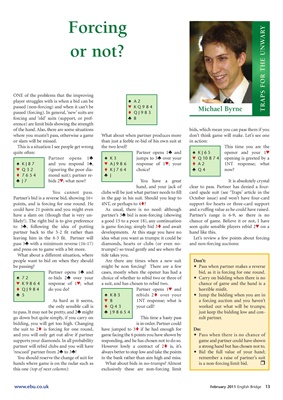 ONE of the problems that the improving

player struggles with is when a bid can be ´ A2

of the hand. Also, there are some situations bids, which mean you can pass them if you

where you mustn’t pass, otherwise a game What about when partner produces more don’t think game will make. Let’s see one

or slam will be missed. than just a feeble re-bid of his own suit at in action:

This is a situation I see people get wrong the two level? This time you are the

® J7 bids 2™; what now? You have a great It is absolutely crystal

hand, and your jack of clear to pass. Partner has denied a four-

You cannot pass. clubs will be just what partner needs to fill card spade suit (see ‘Traps’ article in the

Partner’s bid is a reverse bid, showing 16+ in the gap in his suit. Should you leap to October issue) and won’t have four-card

points, and is forcing for one round. He 4NT, or perhaps to 4t? support for hearts or three-card support

could have 21 points and you might even As usual, there is no need: although and a ruffing value as he could have raised.

have a slam on (though that is very un- partner’s 3® bid is non-forcing (showing Partner’s range is 6-9, so there is no

likely!). The right bid is to give preference a good 15 to a poor 18), any continuation chance of game. Believe it or not, I have

to 3®, following the idea of putting is game forcing; simply bid 3t and await seen quite sensible players rebid 2™ on a

partner back to the 5-2 fit rather than developments. At this stage you have no hand like this.

leaving him in the 4-3 fit. Partner will idea what you want as trumps: it could be Let’s review a few points about forcing

pass 3® with a minimum reverse (16-17) diamonds, hearts or clubs (or even no- and non-forcing auctions:

and press on to game with a bit more. trumps!) so tread gently and see where the

What about a different situation, where tide takes you.

people want to bid on when they should Are there any times when a new suit Don’t:

be passing? might be non forcing? There are a few • Pass when partner makes a reverse

Partner opens 1® and cases, mostly when the opener has had a bid, as it is forcing for one round.

As hard as it seems, ™ 8 1NT response; what is a forcing auction and you haven’t

the only sensible call is t Q43 your call? worked out what will be trumps;

go down but quite simply, if you carry on This time a hasty pass sult partner.

bidding, you will get too high. Changing is in order. Partner could

the suit to 2t is forcing for one round, have jumped to 3t if he had enough for Do:

supports your diamonds. In all probability responding, and he has chosen not to do so. game and partner could have shown

partner will rebid clubs and you will have However lowly a contract of 2t is, it’s a strong hand but has chosen not to.

‘rescued’ partner from 2® to 3®! always better to stop low and take the points • Bid the full value of your hand;

You should reserve the change of suit for in the bank rather than aim high and miss. remember a raise of partner’s suit

hands where game is on the radar such as What about bids in no-trumps? Almost is a non-forcing limit bid. r

this one (top of next column): exclusively these are non-forcing limit