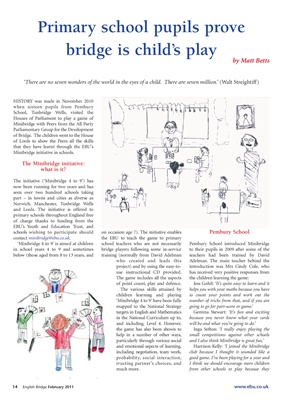 ‘There are no seven wonders of the world in the eyes of a child. There are seven million.’ (Walt Streightiff)

HISTORY was made in November 2010

when sixteen pupils from Pembury

Houses of Parliament to play a game of

Minibridge with Peers from the All Party

Parliamentary Group for the Development

of Bridge. The children went to the House

of Lords to show the Peers all the skills

that they have learnt through the EBU’s

The initiative (‘Minibridge 4 to 9’) has

now been running for two years and has

part – in towns and cities as diverse as

and Leeds. The initiative is offered to

of charge thanks to funding from the

EBU’s Youth and Education Trust, and

schools wishing to participate should on occasion age 7). The initiative enables Pembury School

contact minibridge@ebu.co.uk. the EBU to teach the game to primary

below (those aged from 8 to 13 years, and training (normally from David Adelman teachers had been trained by David

who created and leads this Adelman. The main teacher behind the

project) and by using the easy-to- introduction was Mrs Cindy Cole, who

use instructional CD provided. has received very positive responses from

The game includes all the aspects the children learning the game:

of point count, play and defence. Jess Gohil: ‘It’s quite easy to learn and it

‘Minibridge 4 to 9’ have been fully number of tricks from that, and if you are

mapped to the National Strategy going to go for part-score or game.’

in the National Curriculum up to, because you never know what your cards

and including, Level 4. However, will be and what you’re going to do.’

the game has also been shown to Inga Sefton: ‘I really enjoy playing the

help in a number of other ways, small competitions against other schools

particularly through various social and I also think Minibridge is great fun.’

and emotional aspects of learning, Harrison Kelly: ‘I joined the Minibridge

including negotiation, team work, club because I thought it sounded like a

proba bility, social interaction, good game. I’ve been playing for a year and

trust ing partner’s choices, and I think we should encourage more children

much more. from other schools to play because they