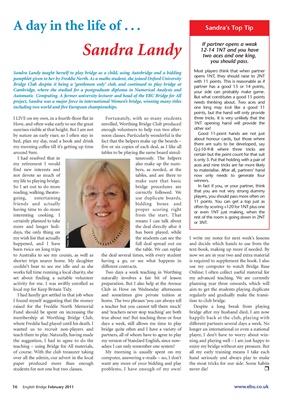 If partner opens a weak

two aces and one king,

Sandra Landy taught herself to play bridge as a child, using Autobridge and a bidding Most players think that when partner

opens 1NT, they should raise to 2NT

pamphlet given to her by Freddie North. As a maths student, she joined Oxford University

with 11 points. This is reasonable as if

Bridge Club despite it being a ‘gentlemen only’ club, and continued to play bridge at partner has a good 13 or 14 points,

Cambridge, where she studied for a postgraduate diploma in Numerical Analysis and your side can probably make game.

Automatic Computing. A former university lecturer and head of the EBU Bridge for All But what constitutes a good 11 points

project, Sandra was a major force in international Women’s bridge, winning many titles needs thinking about. Two aces and

including two world and five European championships. one king may look like a good 11

points, but the hand will only provide

I LIVE on my own, in a fourth-floor flat in Fortunately, with so many students three tricks. It is very unlikely that the

sunrises visible at that height. But I am not enough volunteers to help run two after- other six!

by nature an early riser, so I often stay in noon classes. Particularly wonderful is the Good 11-point hands are not just

about honour cards, but those where

bed, plan my day, read a book and drink fact that the helpers make up the boards –

there are suits to be developed, say

my morning coffee till it’s getting up time five or six copies of each deal, as I like all

around 9am. tables to be playing the same board simul- certain but the point count for that suit

I had resolved that in taneously. The helpers is only 3. Put that holding with a pair of

find new interests and bers, as needed, at the to materialise. After all, partners’ hand

not devote so much of tables, and are there to now only needs to generate four

my life to playing bridge. make sure that basic winners.

So I set out to do more bridge procedures are In fact if you, or your partner, think

reading, walking, theatre- correctly followed. We that you are not very strong dummy

going, entertaining use dupli cate boards, players, you should pass more often on

having time to do more pro per scoring right

or even 1NT just making, when the

interesting cooking. I from the start. That rest of the room is going down in 2NT

certainly planned to take means I can talk about or 3NT.

more and longer holi- the deal directly after it

days, the only thing on has been played, while

happened, and I have full deal spread out on and decide which hands to use from the

been twice on long trips the table. We can replay text-book, making up more if needed. By

to Australia to see my cousin, as well as the deal several times, with every student now we are in year two and extra material

shorter trips nearer home. My daughter having a go, or see what happens in is required to supplement the book. I also

couldn’t bear to see me idle and as she different contracts. use my computer to watch Bridge Base

set about finding a suitable volunteer naturally involves a fair bit of lesson my advanced teaching. We are currently

activity for me. I was swiftly enrolled as preparation. But I also help at the Avenue planning year three onwards, which will

local rep for Keep Britain Tidy. Club in Hove on Wednesday afternoons aim to get the students playing duplicate

I found myself suggesting that the money home. The two phrases ‘you can always tell tion to club bridge.

Fund should be spent on increasing the and ‘teachers never stop teaching’ are both bridge after my husband died, I am now

membership at Worthing Bridge Club, true about me! But teaching three or four happily back at the club, playing with

where Freddie had played until his death. I days a week, still allows me time to play different partners several days a week. No

teach them to play. Naturally, having made partners, all of whom have to agree to play player, I don’t have to worry about win-

the suggestion, I had to agree to do the my version of Standard English, since now- ning and playing well – I am just happy to

teaching – using Bridge for All materials, adays I can only remember one system! enjoy my bridge without any pressure. But

of course. With the club treasurer taking My morning is usually spent on my all my early training means I take each

over all the admin, our advert in the local computer, answering e-mails – no, I don’t hand seriously and always play to make

paper produced more than enough want any more of your bidding and play the most tricks for our side. Some habits

students for not one but two classes. problems, I have enough of my own! never die! r