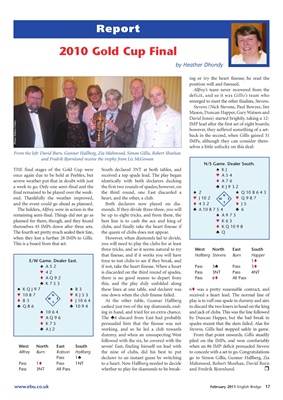 ing or try the heart finesse; he read the

Allfrey’s team never recovered from the

deficit, and so it was Gillis’s team who

emerged to meet the other finalists, Stevens.

IMP lead after the first set of eight boards;

however, they suffered something of a set-

back in the second, when Gillis gained 31

IMPs, although they can consider them-

selves a little unlucky on this deal:

and Fredrik Bjornlund receive the trophy from Liz McGowan

THE final stages of the Gold Cup were South declared 3NT at both tables, and ´ KJ

once again due to be held at Peebles, but received a top spade lead. The play began ™ A54

a week to go. Only one semi-final and the the first two rounds of spades; however, on ® KJ932

and the event could go ahead as planned. Both declarers now played on dia- t 432 t J5

remaining semi-final. Things did not go as be up to eight tricks, and from there, the ´ A975

planned for them, though, and they found best line is to cash the ace and king of ™ K63

themselves 45 IMPs down after three sets. clubs, and finally take the heart finesse if t K Q 10 9 8

The fourth set pretty much sealed their fate, the queen of clubs does not appear. ® Q

when they lost a further 28 IMPs to Gillis. However, when diamonds fail to divide,

This is a board from that set: you will need to play the clubs for at least

three tricks, and so it seems natural to try West North East South

that finesse, and if it works you will have Hallberg Stevens Burn Happer

E/W Game. Dealer East. time to test clubs to see if they break, and 1t

™ 42 is discarded on the third round of spades, Pass 3NT Pass 4NT

® K753 this, and the play duly unfolded along

´ KQJ97 ´ 83 these lines at one table, and declarer was 6t was a pretty reasonable contract, and

´ 10 6 4 ing in hand, and tried for an extra chance. and jack of clubs. This was the line followed

™ AQ96 The ®4 discard from East had probably by Duncan Happer, but the bad break in

t K75 persuaded him that the finesse was not spades meant that the slam failed. Alas for

® AJ2 working, and so he led a club towards Stevens, Gillis had stopped safely in game.

dummy, and when an unsuspecting West From that point onwards, Gillis steadily

followed with the six, he covered with the piled on the IMPs, and won comfortably

Allfrey Burn Robson Hallberg the nine of clubs, did his best to put to concede with a set to go. Congratulations

Pass 3NT All Pass whether to play for diamonds to be break- and Fredrik Bjornlund. r