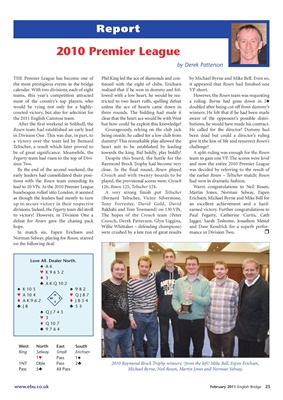 THE Premier League has become one of Phil King led the ace of diamonds and con- by Michael Byrne and Mike Bell. Even so,

the most prestigious events in the bridge tinued with the eight of clubs. Erichsen it appeared that Rosen had finished one

calendar. With two divisions, each of eight realised that if he won in dummy and fol- VP short.

teams, this year’s competition attracted lowed with a low heart, he would be res- However, the Rosen team was requesting

most of the country’s top players, who tricted to two heart ruffs, spelling defeat a ruling. Byrne had gone down in 2´

coveted victory, but also for selection for three rounds. The bidding had made it winners. He felt that if he had been made

the 2011 English Camrose team. clear that the heart ace would be with West aware of the opponent’s possible distri-

After the first weekend in Solihull, the but how could he exploit this knowledge? butions, he would have made his contract.

Rosen team had established an early lead Courageously, relying on the club jack He called for the director! Dummy had

in Division One. This was due, in part, to being onside, he called for a low club from been dead but could a director’s ruling

a victory over the team led by Bernard dummy! This remarkable play allowed the give it the kiss of life and resurrect Rosen’s

Teltscher, a result which later proved to heart suit to be established by leading challenge?

be of great significance. Meanwhile, the towards the king. Bid boldly, play boldly! A split-ruling was enough for the Rosen

Fegarty team had risen to the top of Divi- Despite this board, the battle for the team to gain one VP. The scores were level

By the end of the second weekend, the close. In the final round, Rosen played was decided by referring to the result of

early leaders had consolidated their posi- Crouch and with twenty boards to be the earlier Rosen – Teltscher match; Rosen

tions with the Rosen team extending its played, the provisional scores were: Crouch had won in dramatic fashion.

as though the leaders had merely to turn (Bernard Teltscher, Victor Silverstone, Erichsen, Michael Byrne and Mike Bell for

up to secure victory in their respective Tony Forrester, David Gold, David an excellent achievement and a hard-

to victory! However, in Division One a The hopes of the Crouch team (Peter Paul Fegarty, Catherine Curtis, Cath

In match six, Espen Erichsen and were crushed by a late run of great results mance in Division Two. r

on the following deal: