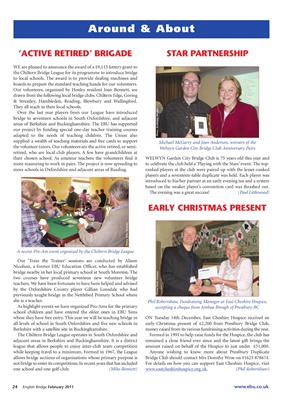 WE are pleased to announce the award of a £9,115 lottery grant to

the Chiltern Bridge League for its programme to introduce bridge

to local schools. The award is to provide dealing machines and

boards to prepare the standard teaching hands for our volunteers.

Our volunteers, organised by Henley resident Joan Bennett, are

They all teach in their local schools.

Over the last year players from our League have introduced

bridge to seventeen schools in South Oxfordshire, and adjacent

areas of Berkshire and Buckinghamshire. The EBU has supported

adapted to the needs of teaching children. The Union also

supplied a wealth of teaching materials and free cards to support Michael McGarry and Jean Anderson, winners of the

retired, who are local club players. A few have grandchildren at

their chosen school. As amateur teachers the volunteers find it WELWYN Garden City Bridge Club is 75 years old this year and

more reassuring to work in pairs. The project is now spreading to to celebrate the club held a ‘Playing with the Stars’ event. The top-

more schools in Oxfordshire and adjacent areas of Reading. ranked players at the club were paired up with the lesser-ranked

players and a seventeen-table duplicate was held. Each player was

based on the weaker player’s convention card was thrashed out.

The evening was a great success! (Paul Littlewood)

A recent Pro-Am event organised by the Chiltern Bridge League

Our ‘Train the Trainer’ sessions are conducted by Alison

Nicolson, a former EBU Education Officer, who has established

bridge nearby in her local primary school at South Moreton. The

teachers. We have been fortunate to have been helped and advised

by the Oxfordshire County player Gillian Lonsdale who had

previously taught bridge in the Nettlebed Primary School where

she is a teacher. Phil Robertshaw, Fundraising Manager at East Cheshire Hospice,

school children and have entered the older ones in EBU Sims

where they have free entry. This year we will be teaching bridge in ON Tuesday 14th December, East Cheshire Hospice received an

all levels of school in South Oxfordshire and five new schools in early Christmas present of £2,200 from Prestbury Bridge Club,

Berkshire with a satellite site in Buckinghamshire. money raised from its various fundraising activities during the year.

The Chiltern Bridge League operates in South Oxfordshire and Formed in 1991 to help raise funds for the Hospice, the club has

adjacent areas in Berkshire and Buckinghamshire. It is a district remained a close friend ever since and the latest gift brings the

league that allows people to enjoy inter-club team competition amount raised on behalf of the Hospice to just under £51,000.

while keeping travel to a minimum. Formed in 1967, the League Anyone wishing to know more about Prestbury Duplicate

not bridge to enter its competitions. In recent years that has included For details on how you can support East Cheshire Hospice, visit