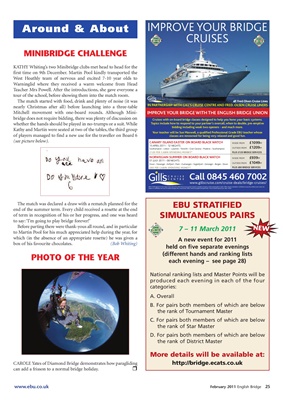 Around & About IMPROVE YOUR BRIDGE

Warninglid where they received a warm welcome from Head

Teacher Mrs Powell. After the introductions, she gave everyone a

tour of the school, before showing them into the match room.

The match started with food, drink and plenty of noise (it was

nearly Christmas after all) before launching into a three-table

Mitchell movement with one-board rounds. Although Mini- IMPROVE YOUR BRIDGE WITH THE ENGLISH BRIDGE UNION

bridge does not require bidding, there was plenty of discussion on Cruises with on-board bridge classes designed to help you hone your basic systems.

whether the hands should be played in no-trumps or a suit. While Topics include how to respond to your partner’s overcall, when to double, pre-emptive

bidding including weak two openers - and much more.

Kathy and Martin were seated at two of the tables, the third group

Your teacher will be Sue Maxwell, a qualiﬁed Professional Grade EBU teacher whose

of players managed to find a new use for the traveller on Board 6 classes are renowned for being very relaxed and good fun.

(see picture below). CANARY ISLAND EASTER ON BOARD BLACK WATCH INSIDE FROM £1099PP

NORWEGIAN SUMMER ON BOARD BLACK WATCH INSIDE FROM £939PP

ABTA 31649 agents for Fred. Olsen Cruise Lines ATOL 5016. Prices are per person based on standard occupancy of the lowest grade of cabin. Offers may be amended or withdrawn at any time without prior notice, are

subject to availability and must be booked through Gills Cruise Centre. Offers cannot be applied retrospectively. *Free On Board Spend is per cabin. E&OE.

end of the summer term. Every child received a rosette at the end

of term in recognition of his or her progress, and one was heard

Before parting there were thank-yous all round, and in particular NEW

to Martin Pool for his much appreciated help during the year, for

PHOTO OF THE YEAR each evening – see page 28)

National ranking lists and Master Points will be

produced each evening in each of the four

B. For pairs both members of which are below

the rank of Tournament Master

C. For pairs both members of which are below

the rank of Star Master

D. For pairs both members of which are below

the rank of District Master

More details will be available at:

can add a frisson to a normal bridge holiday. r