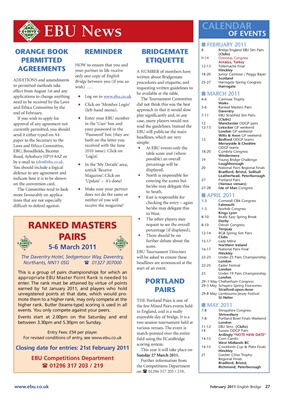 HOW to ensure that you and 12-13 Tollemache Final

only one copy of English written about Bridgemate Scotland

ADDITIONS and amendments Bridge between you (if you so procedures and etiquette, and 25-27 Harrogate Spring Congress

effect from August 1st and any

applications to change anything

need to be received by the Laws

and Ethics Committee by the • Click on ‘Member Login’

did not think this was the best

approach in that it would slow

play significantly and, in any 7-11 EBU Stratified Sim Pairs

If you wish to apply for

approval of any agreement not

in the ‘User’ box and

case, many players would not

read the guidelines. Instead the 12-13 Leicester GP weekend

paper to the Secretary to the both on the letter you

Laws and Ethics Committee, received with the June

EBU, Broadfields, Bicester 2010 issue). Click on • At EBU events only the

table score and (where Windermere

You should include a logical • In the ‘My Details’ area,

defence to any agreement and Bradford, Bristol, Solihull

indicate how it is to be shown

on the convention card. (Various venues)

he/she may delegate this

The Committee tend to look • Make sure your partner

more favourably on applica- does not do the same or

difficult to defend against. receive the magazine!

he/she may delegate this 1-3 Norfolk Congress

• The other players may Derby

PAIRS • There should be no Clubs

further debate about the 15-17 Lady Milne

The Daventry Hotel, Sedgemoor Way, Daventry, will be asked to ensure these 22-23 Under-25 Pairs Championship

start of an event. London

enter. The rank must be attained by virtue of points PORTLAND 29–1 May Cheltenham Congress

earned by 1st January 2011, and players who hold PAIRS Stratford-upon-Avon

unregistered points at that date, which would pro- 29-8 May Lambourne Jersey Festival

mote them to a higher rank, may only compete at the THE Portland Pairs is one of

events. You only compete against your peers. in England, and is a really 7-8 Shropshire Congress

Events start at 2.00pm on the Saturday and end enjoyable day of bridge. It is a 7-8 Portland Bowl Finals Weekend

between 3.30pm and 5.30pm on Sunday. two-session tournament held at London

This year it will take place on Hinckley