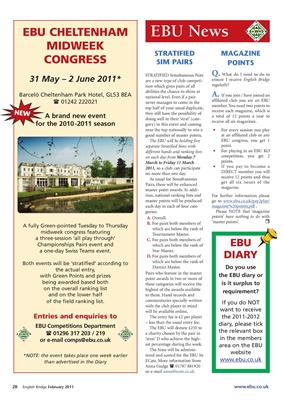 STRATIFIED Simultaneous Pairs Q. What do I need to do to

tion which gives pairs of all regularly?

abilities the chance to shine at

Barceló Cheltenham Park Hotel, GL53 8EA national level. Even if a pair A. If you join / have joined an

member. You need two points to

top half of your usual duplicate,

receive each magazine, which is

NEW A brand new event they still have the possibility of

a total of 12 points a year to

doing well in their ‘strat’ (cate-

good number of master points. at an affiliated club or any

The EBU will be holding five EBU congress, you get 1

different hands and ranking lists • For playing in an EBU KO

on each day from Monday 7 competition, you get 2

on more than one day. DIRECT member you will

As usual for Simultaneous receive 12 points and thus

get all six issues of the

Pairs, there will be enhanced

master points will be produced go to www.ebu.co.uk/pay2play/

each day in each of four cate- magazine%20points.pdf .

A. Overall. points’ have nothing to do with

B. For pairs both members of ‘master points’. r

A fully Green-pointed Tuesday to Thursday

which are below the rank of

a three-session ‘all play through’ C. For pairs both members of

Championships Pairs event and which are below the rank of EBU

D. For pairs both members of

which are below the rank of

Both events will be ‘stratified’ according to

District Master. Do you use

Pairs who feature in the master

with Green Points and prizes the EBU diary or

point awards in two or more of

on the overall ranking list highest of the awards available

and on the lower half to them. Hand records and

If you do NOT

with the club player in mind

will be available online. want to receive

EBU Competitions Department The EBU will donate £250 to

or e-mail comps@ebu.co.uk ‘strat’ D who achieve the high- in the members

est percentage during the week. area on the EBU

The Sims will be adminis-

*NOTE: the event takes place one week earlier tered and scored for the EBU by website

than advertised in the Diary ECats. More information from www.ebu.co.uk