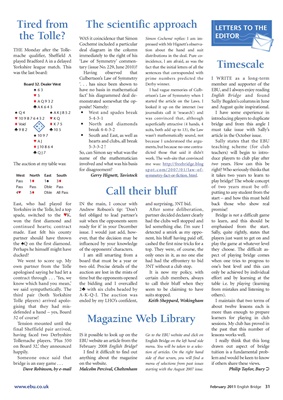 Tired from The scientific approach LETTERS TO THE

the Tolle? WAS it coincidence that Simon Simon Cochemé replies: I am im- EDITOR

mache qualifier, Sheffield A immediately to the right of his distributions in the deal. Pure co-

played Bradford A in a delayed ‘Law of Symmetry’ commen- incidence, I am afraid, as was the

Yorkshire league match. This tary (issue No. 229, June 2010)? fact that the initial letters of all the Timescale

was the last board: Having observed that sentences that corresponded with

Board 32. Dealer West ‘. . . has since been shown to Derby winner. member and supporter of the

´ 63 have no basis in mathematical I had vague memories of Culb- EBU, and I always enjoy reading

t AQ932 monstrated somewhat the op- started the article on the Laws. I Sally Bugden’s columns in June

®AK643 posite! Namely: looked it up on the internet (we and August quite inspirational.

t K75 • North and diamonds superficially attractive (4 hands, 4 bridge and from this angle I

´ 10 9 7 • South and East, as well as wasn’t mathematically sound, not article in the October issue.

™ AJ hearts and clubs, all break because I understood the argu- Sally states that the EBU

®QJ7 So, can Simon say what was the dicted those that said it didn’t teachers) will begin to intro-

name of the mathematician work. The web-site that convinced duce players to club play after

The auction at my table was: involved and what was his basis me was: http://freebridge.blog two years. How can this be

Pass Pass Dble Pass of two years must be off-

start – and how this must hold

East, who had played for IN the main, I concur with and surprising, 3NT bid. back those who show real

Yorkshire in the Tolle, led a top Andrew Robson’s tip: ‘Don’t After some deliberation, promise!

spade, switched to the ™K, feel obliged to lead partner’s partner decided declarer clearly Bridge is not a difficult game

won the first diamond and suit when the opponents seem had the clubs well stopped and to learn, and this should be

contin ued hearts; contract ready for it’ in your December led something else. I’m sure I emphasised from the start.

made. East felt his county issue. I would just add, how- detected a smirk as my oppo- Sally, quite rightly, states that

partner should have thrown ever, that the decision may be nent, his bluff having paid off, players just want to get on and

the ´Q on the first diamond. influenced by your knowledge cashed the first nine tricks for a play the game at whatever level

Perhaps he himself might have of the opponents’ characters. top. They were, of course, the they choose. The difficult as-

ducked? I am still smarting from a only ones in it, as no one else pect of playing bridge comes

We went to score up. My board that must be a year or had had the effrontery to bid when one tries to progress to

own partner from the Tolle two old. Precise details of the 3NT without a club stop. one’s best level and this can

apologised saying he had let a auction are lost in the mists of It is now my policy, with only be achieved by individual

contract through . . . ‘Yes, we time but the opponents opened certain club members, always effort and by learning at the

know which hand you mean,’ the bidding and I overcalled to call their bluff when they table i.e. by playing (learning

we said sympathetically. The 2® with six clubs headed by seem to be claiming to have from mistakes and listening to

third pair (both Yorkshire A-K-Q-J. The auction was suits stopped. others).

gising that they had mis- about twelve lessons each is

defended a hand – yes, Board more than enough to prepare

Tension mounted until the

sessions. My club has proved in

final Sheffield pair arrived, the past that this number of

having faced two Derbyshire IS it possible to look up on the Go to the EBU website and click on lessons works well.

Tollemache players. ‘Plus 550 EBU website an article from the English Bridge on the left hand side I really think that this long

on Board 32,’ they announced February 2008 English Bridge? menu. You will be taken to a selec- drawn out aspect of bridge

happily. I find it difficult to find out tion of articles. On the right hand tuition is a fundamental prob-

Someone once said that anything about the magazine side of that screen, you will find a lem and would be keen to know

bridge is an easy game . . . on the website. menu of selections from past issues if others share these views.