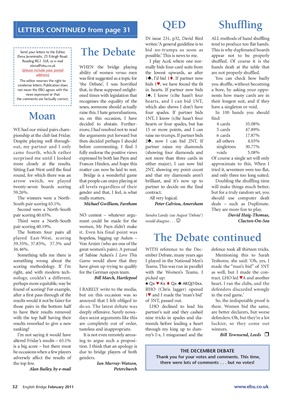 IN issue 231, p32, David Bird ALL methods of hand shuffling

writes: ‘A general guideline is to tend to produce too flat hands.

The Debate bid no-trumps as soon as

possible.’ This is news to me.

This is why duplimated boards

appear not to be properly

Reading RG1 5LR, or e-mail I play Acol, where one nor- shuffled. Of course it is the

elena@ebu.co.uk WHEN the bridge playing mally bids four-card suits from hands dealt at the table that

ability of women versus men the lowest upwards, so after are not properly shuffled.

was first suggested as a topic for 1®, I’d bid 1t. If partner now You can check how badly

condense letters. Publication does ‘the Debate’, I was horrified bids 1™, we have found the fit you shuffle, without becoming

not mean the EBU agrees with the that, in these supposed enlight- in hearts. If partner now bids a bore, by asking your oppo-

views expressed or that ened times with legislation that 1´, I know (s)he hasn’t four nents how many cards are in

the comments are factually correct.

recognises the equality of the hearts, and I can bid 1NT, their longest suit, and if they

sexes, someone should actually which also shows I don’t have have a singleton or void.

raise this. I hate generalisations, four spades. If partner bids In 100 hands you should

decided to abstain. Further- hearts or four spades, but has 4 cards 35.08%

Despite playing well through- then decided perhaps I should 2®, now I can bid 2NT. If all others 4.03%

out, my partner and I only before commenting. I find I partner raises my diamonds singletons 30.77%

more closely at the results. Frances Hinden, and hope this either major), I can now bid approximate to this. When I

Sitting East-West until the final matter can now be laid to rest. 2NT, showing my point count tried it, seventeen were too flat,

round, for which there was an Bridge is a wonderful game and that my diamonds aren’t and only three too long suited.

arrow switch, we played that people can enjoy playing at brilliant, and it’s now up to Doubling the shuffling time

twenty-seven boards scoring all levels regardless of their partner to decide on the final will make things much better,

The winners were a North- really matters. All very logical. should use computer dealt

Second were a North-South They are more fun to play.

Third were a North-South ment could be made for the would disagree . . . J Clacton-On-Sea

The bottom four pairs all it. Even his final point was

Von Arnim (who are one of the

36.46%. great women’s pairs). A perusal WITH reference to the Dec- defence took all thirteen tricks.

Something tells me there is of Sabine Auken’s I Love This ember Debate, many years ago Mentioning this to Sarah

something wrong about the Game would show that they I played in the National Men’s Teshome, she said: ‘Oh, yes, I

scoring methodology. If I’m have given up trying to qualify Teams. This was run in parallel made the “man’s bid” of 3NT

right, and with modern tech- for the German open team. with the Women’s Teams. I as well, but I made the con-

nology, couldn’t a different, Bill March, Hartlepool picked up: tract. LHO led ™A and another

after a first pass through of the but on this occasion was so 1™ and I made the ‘man’s bid’ in the end game.’

results would it not be fairer for annoyed that I felt obliged to of 3NT, passed out. So, the indisputable proof is

those pairs in the bottom half do so. The latest debate was LHO declined to lead his there. Women bid the same,

to have their results removed deeply offensive. Surely nowa- partner’s suit and they cashed are better declarers, but worse

with the top half having their days sexist arguments like this nine tricks in spades and dia- defenders. Oh, but they’re a lot

results reworked to give a new are completely out of order, monds before leading a heart luckier, so they come out

ranking? tasteless and inappropriate. through my king up to dum- winners.

I’m not saying it would have It is not even remotely amus- my’s J-x. I misguessed and the Bill Townsend, Leeds r

altered Friday’s results – 65.1% ing to argue such a proposi-

is a big score – but there must tion. I think that an apology is

adversely affect the results of genders. Thank you for your votes and comments. This time,

the top few. Ian Murray-Watson, there were lots of comments . . . but no votes!