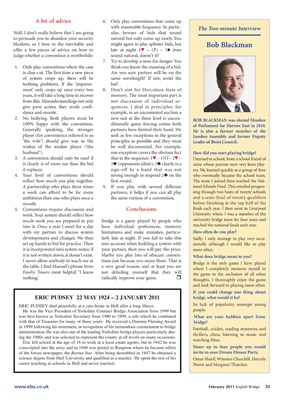 A bit of advice 6. Only play conventions that come up

with reasonable frequency. In partic- The Two-minute Interview

Well, I don’t really believe that I am going ular, beware of bids that sound

to persuade you to abandon your security natural but only come up rarely. You

blankets, so I bow to the inevitable and might agree to play splinter bids, but Bob Blackman

judge whether a convention is worthwhile: sound natural, doesn’t it?

7. Try to develop a nose for danger. You

1. Only play conventions where the case think you know the meaning of a bid.

is clear-cut. The first time a new piece Are you sure partner will be on the

of system crops up, there will be same wavelength? If not, avoid the

teething problems. If the ‘improve- bid!

ment’ only crops up once every two 8. Don’t aim for Herculean feats of

years, it will take a long time to recover memory. The most important part is

from this. Misunderstandings not only not discussion of individual se -

give poor scores, they erode confi- quences. I deal in principles: for

dence and morale. example, in an uncontested auction a

2. No bullying. Both players must be new suit at the three level is uncon- BOB BLACKMAN was elected Member

100% happy with the convention. ditionally game forcing unless both of Parliament for Harrow East in 2010.

Generally speaking, the stronger partners have limited their hand. We He is also a former member of the

‘the wife’) should give way to the principles as possible and they must Leader of Brent Council.

wishes of the weaker player (‘the be well documented. For example,

husband’). one exception covers the obvious fact How did you start playing bridge?

it clearly is of more use than the bid 3® (opponents silent), 3® clearly is a mine whose parents were very keen play-

it replaces. sign-off by a hand that was not ers. We learned quickly as a group of four

4. Your level of conventions should strong enough to respond 2® on the who eventually became the school team.

reflect how much you play together. first round. The team I joined then reached the Nat-

A partnership who plays three times 9. If you play with several different ional Schools Final. This entailed progres-

a week can afford to be far more partners, it helps if you can all play sing through two heats of twenty schools

ambitious than one who plays once a the same version of a convention. and a semi-final of twenty qualifiers

month. before finishing in the top half of the

5. Conventions require discussion and Conclusions finals each year. I then went to Liverpool

work. Your system should reflect how University where I was a member of the

into it. Once a year I meet for a day have individual preferences, memory reached the national finals each year.

with my partner to discuss system limitations and make mistakes, particu- How often do you play?

developments and changes. We then larly late at night. If you fail to take this Sadly, I only manage to play very occa-

set up hands to bid for practice. Then into account when building a system with sionally although I would like to play

it is incorporated into system notes: if your partner, then you will pay the price. more often.

it is not written down, it doesn’t exist. Maybe you play lots of obscure conven- What does bridge mean to you?

I never allow anybody to teach me at tions just because you enjoy them. That is

Bridge is the only game I have played

the table. I find Manuel’s phrase from a very good reason, and at least you are where I completely immerse myself in

Fawlty Towers most helpful: ‘I know not deluding yourself that they will the game to the exclusion of all other

nothing.’ radically improve your game. r thoughts. I thoroughly enjoy the game

If you could change one thing about

Eric PudsEy died peacefully at a care home in Hull after a long illness. Its lack of popularity amongst young

He was the Vice President of yorkshire contract Bridge Association from 1999 but people.

was best known as yorkshire secretary from 1980 to 1999, a role which he combined What are your hobbies apart from

with that of Treasurer for many of those years. He received a dimmie Fleming Award bridge?

in 1999 following his retirement, in recognition of his tremendous commitment to bridge Football, cricket, reading mysteries and

administration. He was also one of the leading yorkshire bridge players particularly dur-

thrillers, chess, listening to music and

ing the 1980s and was selected to represent the county at all levels on many occasions.

of the forces newspaper, the Burma Star. After being demobbed in 1947 he obtained a invite to your Dream Dinner Party.

science degree from Hull university and qualified as a teacher. He spent the rest of his Omar Sharif, Winston Churchill, Hercule

career teaching at schools in Hull and never married. Poirot and Margaret Thatcher.