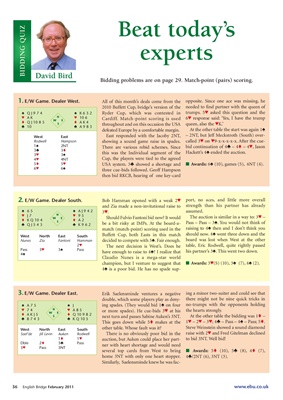 1. E/W Game. Dealer West. All of this month’s deals come from the opposite. Since one ace was missing, he

2010 Buffett Cup, bridge’s version of the needed to find partner with the queen of

throughout and on this occasion the USA

defeated Europe by a comfortable margin. At the other table the start was again 1´

Rodwell Hampson showing a sound game raise in spades. called 3™ on ™9-x-x-x-x-x. After the cue-

3™ 3´ this was the Individual segment of the Hackett’s 4´ ended the auction.

4™ 4NT Cup, the players were tied to the agreed

then bid RKCB, hearing of one key-card

W E Should Fulvio Fantoni bid now? It would The auction is similar in a way to: 3™ –

West North East South Buffett Cup, both Easts in this match should now. 4´ went three down and the

Nunes Zia Fantoni Hamman decided to compete with 3´. Fair enough. board was lost when West at the other

2™ The next decision is West’s. Does he table, Eric Rodwell, quite rightly passed

have enough to raise to 4´? I realize that

Claudio Nunes is a mega-star world

double, which some players play as deny- there might not be nine quick tricks in

´ A75 ´ J ing spades. (They would bid 1´ on four no-trumps with the opponents holding

West North East South other table. Whose fault was it? Steve Weinstein showed a sound diamond

ner with heart shortage and would need

Similarly, Saelensminde knew he was fac-