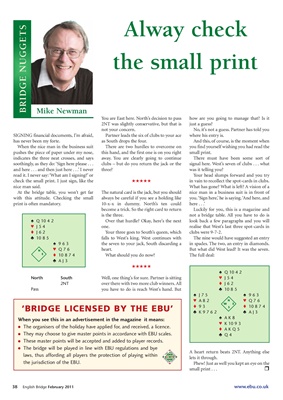 You are East here. North’s decision to pass how are you going to manage that? Is it

2NT was slightly conservative, but that is just a guess?

not your concern. No, it’s not a guess. Partner has told you

SIGNING financial documents, I’m afraid, Partner leads the six of clubs to your ace where his entry is.

has never been my forte. as South drops the four. And this, of course, is the moment when

pushes the piece of paper under my nose, this hand, and the first one is on you right small print.

indicates the three neat crosses, and says away. You are clearly going to continue There must have been some sort of

read it. I never say: ‘What am I signing?’ or Your head slumps forward and you try

check the small print. I just sign, like the HHHHH in vain to recollect the spot-cards in clubs.

nice man said. What has gone? What is left? A vision of a

At the bridge table, you won’t get far The natural card is the jack, but you should nice man in a business suit is in front of

with this attitude. Checking the small always be careful if you see a holding like you. ‘Sign here,’ he is saying. ‘And here, and

become a trick. So the right card to return Luckily for you, this is a magazine and

is the three. not a bridge table. All you have to do is

´ Q 10 4 2 Over that hurdle? Okay, here’s the next look back a few paragraphs and you will

™ J54 one. realise that West’s last three spot-cards in

® 10 8 5 falls to West’s king. West continues with The nine would have suggested an entry

´ 963 the seven to your jack, South discarding a in spades. The two, an entry in diamonds.

North South Well, one thing’s for sure. Partner is sitting ™ J54

2NT over there with two more club winners. All t J62

When you see this in an advertisement in the magazine it means: ´ AK8

• The organisers of the holiday have applied for, and received, a licence. t AKQ5

• They may choose to give master points in accordance with EBU scales. ® Q4

• The bridge will be played in line with EBU regulations and bye A heart return beats 2NT. Anything else

laws, thus affording all players the protection of playing within lets it through.

the jurisdiction of the EBU. Phew! Just as well you kept an eye on the