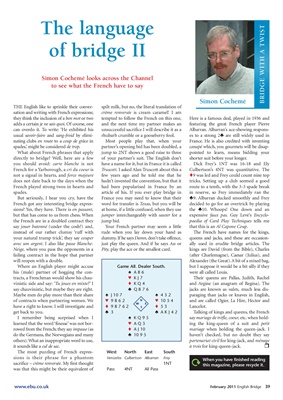 Simon Cochemé looks across the Channel

to see what the French have to say

THE English like to sprinkle their conver- spilt milk, but no, the literal translation of

sation and writing with French expressions; crème renversée is cream caramel! I am

they think the inclusion of a bon mot or two tempted to follow the French on this one, Here is a famous deal, played in 1936 and

adds a certain je ne sais quoi. Of course, one and the next time my partner makes an featuring the great French player Pierre

can overdo it. To write: ‘He exhibited his unsuccessful sacrifice I will describe it as a Albarran. Albarran’s ace-showing respons-

usual savoir-faire and sang-froid by elimi- rhubarb crumble or a gooseberry fool. es to a strong 2® are still widely used in

nating clubs en route to a coup de grâce in Most people play that, when your France. He is also credited with inventing

spades,’ might be considered de trop. partner’s opening bid has been doubled, a canapé which, you gourmets will be disap-

What about French phrases that apply jump to 2NT shows a good raise to three pointed to learn, means bidding your

directly to bridge? Well, here are a few of your partner’s suit. The English don’t shorter suit before your longer.

you should avoid: carte blanche is not have a name for it, but in France it is called Dick Frey’s 1NT was 16-18 and Ely

French for a Yarborough, a cri du coeur is Truscott. I asked Alan Truscott about this a Culbertson’s 4NT was quantitative. The

not a signal in hearts, and force majeure few years ago and he told me that he t9 was led and Frey could count nine top

does not date back to the days when the hadn’t invented the convention, but that it tricks. Setting up a club seemed a good

French played strong twos in hearts and had been popularised in France by an route to a tenth, with the 3-3 spade break

spades. article of his. If you ever play bridge in in reserve, so Frey immediately ran the

But seriously, I hear you cry, have the France you may need to know that their ®9. Albarran ducked smoothly and Frey

French got any interesting bridge expres- word for transfer is Texas, but you will be decided to go for an overtrick by playing

sions? Yes, they have. There is en passant, at home, if a little confused, when they use the ®10. Whoops! One down and an

but that has come to us from chess. When jumper interchangeably with sauter for a expensive faux pas. Guy Levé’s Encyclo-

the French are in a doubled contract they jump bid. paedia of Card Play Techniques tells me

say jouer batonné (under the cosh?) and, Your French partner may seem a little that this is an Al Capone Coup.

instead of our rather clumsy ‘ruff with rude when you lay down your hand as The French have names for the kings,

your natural trump trick’, they say couper dummy. If he says Damn, don't take offence, queens and jacks, and these are occasion-

avec son argent. I also like passe Blanche- just play the queen. And if he says Ass or ally used in erudite bridge articles. The

Neige, where you pass the opponents in a Pity, play the ace or the smallest card. kings are David (from the Bible), Charles

failing contract in the hope that partner (after Charlemagne), Caesar (Julius), and

will reopen with a double. Alexander (the Great). A bit of a mixed bag,

Where an English player might accuse Game All. Dealer South. but I suppose it would be a bit silly if they

his (male) partner of hogging the con- ´ A86 were all called Louis.

tracts, a Frenchman would show his chau- ™ KJ7 Their queens are Pallas, Judith, Rachel

vinistic side and say: ‘Tu joues en mixte?’ I t KQ4 and Argine (an anagram of Regina). The

say chauvinistic, but maybe they are right. ® Q876 jacks are known as valets, much less dis-

I remember being surprised when I ´ KQ95 say mariage de trèfle, coeur, etc. when hold-

rowed from the French; they say impasse (as t A J 10 mariage when holding the queen-jack. I

do the Germans, the Norwegians and many ® 10 9 5 haven’t checked, but no doubt they say

others). What an inappropriate word to use, partenariat civil for king-jack, and ménage

it sounds like a cul de sac. à trois for king-queen-jack. r

The most puzzling of French expres- West North East South

sions is their phrase for a phantom Venizelos Culbertson Albarran Frey