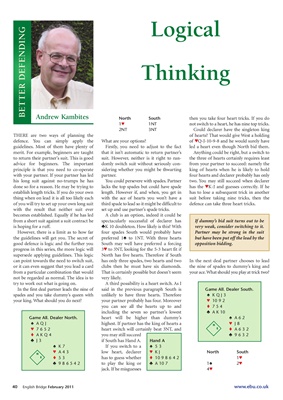 Andrew Kambites North South then you take four heart tricks. If you do

2NT 3NT Could declarer have the singleton king

THERE are two ways of planning the of hearts? That would give West a holding

defence. You can simply apply the What are your options? of ™Q-J-10-9-8 and he would surely have

guidelines. Most of them have plenty of Firstly, you need to adjust to the fact led a heart even though North bid them.

merit. For example, beginners are taught that it isn’t automatic to return partner’s Anything could be right, but a switch to

to return their partner’s suit. This is good suit. However, neither is it right to ran- the three of hearts certainly requires least

advice for beginners. The important domly switch suit without seriously con- from your partner to succeed: namely the

his long suit against no-trumps he has You could persevere with spades. Partner two. You may still succeed when declarer

done so for a reason. He may be trying to lacks the top spades but could have spade has the ™K-J and guesses correctly. If he

establish length tricks. If you do your own length. However if, and when, you get in has to lose a subsequent trick in another

thing when on lead it is all too likely each with the ace of hearts you won’t have a suit before taking nine tricks, then the

of you will try to set up your own long suit third spade to lead so it might be difficult to defence can take three heart tricks.

with the result that neither suit ever set up and use partner’s spade tricks.

becomes established. Equally if he has led A club is an option, indeed it could be

is hoping for a ruff. ®K 10 doubleton. How likely is this? With very weak, consider switching to it.

However, there is a limit as to how far four spades South would probably have Partner may be strong in the suit

the guidelines will get you. The secret of preferred 1´ to 1NT. With three hearts but have been put off the lead by the

good defence is logic and the further you South may well have preferred a forcing opposition bidding.

progress in this series, the more logic will 3™ to 3NT, looking for the 5-3 heart fit if

can point towards the need to switch suit, has only three spades, two hearts and two In the next deal partner chooses to lead

or it can even suggest that you lead a card clubs then he must have six diamonds. the nine of spades to dummy’s king and

from a particular combination that would That is certainly possible but doesn't seem your ace. What should you play at trick two?

not be regarded as normal. The idea is to very likely.

try to work out what is going on. A third possibility is a heart switch. As I

In the first deal partner leads the nine of said in the previous paragraph South is Game All. Dealer South.

spades and you take dummy’s queen with unlikely to have three hearts. Therefore ´ KQJ3

your king. What should you do next? your partner probably has four. Moreover ™ 10 9 2

including the seven so partner’s lowest ® A K 10

Game All. Dealer North. heart will be higher than dummy’s ´ A62

´ AQJ highest. If partner has the king of hearts a N ™ J8