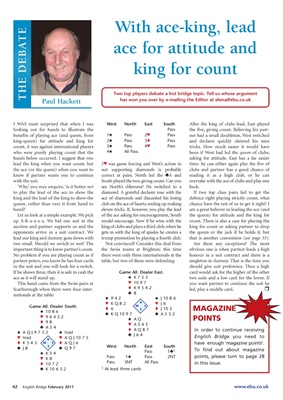 ace for attitude and

Paul Hackett has won you over by e-mailing the Editor at elena@ebu.co.uk

I WAS most surprised that when I was West North East South After the king of clubs lead, East played

looking out for hands to illustrate the Pass the five, giving count. Believing his part-

benefits of playing ace (and queen, from 1´ Pass 2™ Pass ner had a small doubleton, West switched

count, it was against international players 3´ Pass 4™ Pass tricks. How much easier it would have

who were purely playing count that the 4´ All Pass been if West had led the queen of clubs,

hands below occurred. I suggest that you asking for attitude. East has a far easier

lead the king when you want count, but 2™ was game forcing and West’s action in time: he can either again play the five of

know if partner wants you to continue correct at pairs. North led the ®A and reading it as a high club, or he can

with the suit. South played the two, giving count. Can you overtake with the ace of clubs and play one

‘Why,’ you may enquire, ‘is it better not see North’s dilemma? He switched to a back.

to play the lead of the ace to show the diamond. A grateful declarer rose with the If two top class pairs fail to get the

king and the lead of the king to show the ace of diamonds and discarded his losing defence right playing strictly count, what

queen, rather than vary it from hand to club on the ace of hearts, ending up making chance have the rest of us to get it right? I

hand?’ eleven tricks. If, however, you play the lead am a great believer in leading the ace (and

Let us look at a simple example. We pick of the ace asking for encouragement, South the queen) for attitude and the king for

up A-K-x-x-x-x. We bid our suit in the would encourage. Now if he wins with the count. There is also a case for playing the

auction and partner supports us and the king of clubs and plays a third club, when he king for count or asking partner to drop

opponents arrive in a suit contract. We gets in with the king of spades he creates a the queen or the jack if he holds it, but

lead our king and dummy goes down with trump promotion by playing a fourth club. that is another convention (see page 33).

two small. Should we switch or not? The Not convinced? Consider this deal from Are there any exceptions? The most

important thing is to know partner’s count. the Swiss teams at Brighton; this time obvious one is when partner leads a high

partner peters, you know he has four cards table, but two of them were defending: singleton in dummy. That is the time you

in the suit and you will look for a switch. should give suit preference. Thus a high

If he shows three, then it is safe to cash the Game All. Dealer East. card would ask for the higher of the other

nationals at the table: ® 8

® J64 English Bridge you need to

Pass 1®1 To find out about magazine