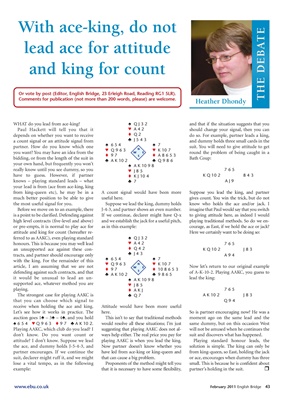 With ace-king, do not

and king for count

WHAT do you lead from ace-king? ´ QJ32 and that if the situation suggests that you

Paul Hackett will tell you that it ™ A42 should change your signal, then you can

depends on whether you want to receive t Q2 do so. For example, partner leads a king,

you want? You may have an idea from the W E round the problem of being caught in a

your lead is from (ace from ace-king, king

from king-queen etc), he may be in a A count signal would have been more Suppose you lead the king, and partner

much better position to be able to give useful here. gives count. You win the trick, but do not

the most useful signal for you. Suppose we lead the king, dummy holds know who holds the ace and/or jack. I

Before we move on to an example, there J-4-3, and partner shows an even number. imagine that Paul would say that you switch

is a point to be clarified. Defending against If we continue, declarer might have Q-x to giving attitude here, as indeed I would

high level contracts (five-level and above) and we establish the jack for a useful pitch, playing traditional methods. So do we en-

or pre-empts, it is normal to play ace for as in this example: courage, as East, if we hold the ace or jack?

attitude and king for count (hereafter re- Here we certainly want to be doing so:

ferred to as AAKC), even playing standard ´ QJ32

tracts, and partner should encourage only ® J43 A94

article, I am assuming that we are not W E Now let’s return to our original example

supported ace, whatever method you are ™ J85

that you can choose which signal to Q94

receive when holding the ace and king. Attitude would have been more useful

Let’s see how it works in practice. The here. So is partner encouraging now? He was a

auction goes 1´ – 3´ – 4´, and you hold This isn’t to say that traditional methods moment ago on the same lead and the

Playing AAKC, which club do you lead? I suggesting that playing AAKC does not al- will not be amused when he continues the

don’t know. Do you want count or ways help either. The real price you pay for suit and discovers what has happened.

attitude? I don’t know. Suppose we lead playing AAKC is when you lead the king. Playing standard honour leads, the

the ace, and dummy holds J-5-4-3, and Now partner doesn’t know whether you solution is simple. The king can only be

partner encourages. If we continue the have led from ace-king or king-queen and from king-queen, so East, holding the jack

suit, declarer might ruff it, and we might that can cause a big problem. or ace, encourages when dummy has three

lose a vital tempo, as in the following Proponents of the method might tell you small. This is because he is confident about

example: that it is necessary to have some flexibility, partner’s holding in the suit. r